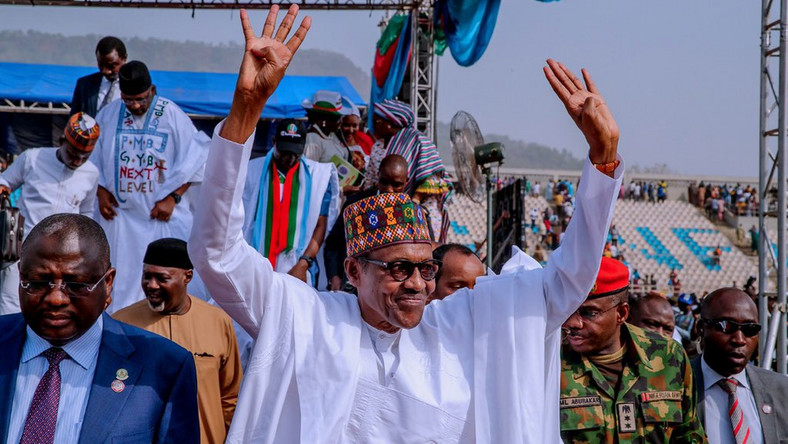 The Presidential campaign train of the All Progressives Congress (APC) has departed for Birnin Kebbi, the Kebbi State capital, after a successful rally in Sokoto, Sokoto State, today

The News Agency of Nigeria (NAN) reports that President Buhari and his entourage had first paid a courtesy visit to the Sultan of Sokoto, Alhaji Sa’ad Abubakar III before moving to the stadium for the rally where he addressed the mammoth crowd.

The president, who alongside APC bigwigs addressed the mammoth crowd of party faithful at the stadium, enjoined all APC members and supporters to ensure electoral victory for the party in the forthcoming general elections.

President Buhari, who spoke in Hausa language, acknowledged that the governing APC government had done tremendously well in the key areas of security, revamping the economy and the fight against corruption.

While reassuring that his administration will continue to identify and bring to book all those found wanting in misappropriation of public funds, the president vowed never to betray the trust reposed in him by Nigerians.

President Buhari expressed delight over the bumper harvests experienced by farmers in different parts of the country in the last two years and urged the people to embark on agricultural activities.

He said: “We thank God that our country witnessed stable rainfalls and subsequent bumper harvest in 2017 and 2018 cropping seasons.

“Let me call on all our people to engage in agricultural activities to enable them obtain additional income to solve some of their domestic challenges like paying children’s school fees, offsetting medical bills and other needs.’’

The president, who presented the Sokoto APC governorship candidate to the people of the state, urged APC members to vote only the party’s candidates in the forthcoming elections.

UNESCO to partner FG, others on quality universal education