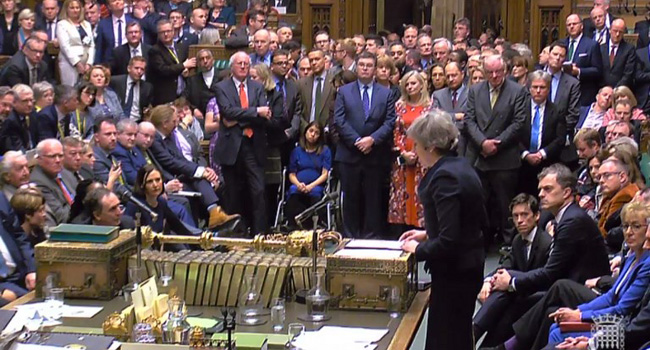 A video grab from footage broadcast by the UK Parliament’s Parliamentary Recording Unit (PRU) shows Britain’s Prime Minister Theresa May (R) as she speaks in the House of Commons in London on January 15, 2019. HO / PRU / AFP

Britain’s parliament on Tuesday voted against Prime Minister Theresa May’s Brexit deal by a massive margin, triggering a no-confidence vote that could bring down her government.

The House of Commons lower house voted 432 to 202 against May’s plan for taking Britain out of the European Union after nearly five decades, one of the biggest defeats ever suffered by a British premier.

The EU warned that the vote, which plunges Britain into uncharted waters, boosts the risk of a “no deal” Brexit.

The vote is set for Wednesday.

Speaking moments before the MPs cast their ballots, May said MPs had a “duty to deliver” on the results of a 2016 referendum that started the divorce.

“I believe we have a duty to deliver on the democratic decision of the British people,” May said, warning MPs that the EU would not offer any “alternative deal”.

“A vote against this deal is a vote for uncertainty, division, and the very real threat of a no deal,” she argued to loud jeers from the packed chamber.

“The responsibility of each and every one of us at this moment is profound, for this is a historic decision that will set the future of our country for generations.”

Most lawmakers have always opposed Brexit, as have some leading members of May’s government, creating an inherent contradiction that has torn apart the island nation.

And with just over two months to go until the scheduled March 29 departure, Britain still cannot decide what to do.

May must now decide whether she tries to hold another vote, gets kicked out of office, delays Brexit — or if Brexit even happens at all.

As their nation’s fate was being decided, hundreds of noisy supporters and opponents of Brexit, some banging drums and others driving floats with huge dolls mocking top UK politicians, rallied outside the ancient parliament building in London.

“It could end up being the day that will lead to us leaving with no deal!” said 25-year-old Simon Fisher, who backs a swift and sharp break with the EU.

A much larger rally nearby in support of a second referendum turned Parliament Square into a sea of EU flags.

One pro-Brexit activist attempting to join the rally was detained by police to shouts of “scum” from fellow protesters in an indication of rising tensions.

Others voiced their support for a second referendum, an option May’s government rules out.

May made it her mission to carry out the wishes of voters after she became premier in July 2016, putting aside her own initial misgivings and stating repeatedly that “Brexit means Brexit”.

But facing a heavy drubbing, May decided to postpone a parliamentary vote in December on the Brexit deal in the hope of winning concessions from Brussels — and that a Christmas break would change lawmakers’ minds.

EU leaders came back with only non-binding clarifications, and just a handful of new MPs have rallied to May’s side.

The UK government’s current plan appears to be to try to ram a very similar version of the agreement through parliament on a second or possibly even third attempt.

READ ALSO: NFF empathises with Kanu, calls on police to track down burglars

European Commission President Jean-Claude Juncker returned to Brussels from Strasbourg on Tuesday “to handle the situation after the vote,” according to his office.

In Strasbourg, German Foreign Minister Heiko Maas raised the possibility of further talks while ruling out a full renegotiation of the text.

Hardline Brexiteers and Remainers oppose the agreement for different reasons and many fear it could lock Britain into an unfavourable trading relationship with the EU.

Bitter debates about Britain’s place in the world have dominated the national discourse ever since the referendum, dividing families and playing out in front of parliament, on Tuesday.

Financial markets were also watching closely, with several currency trading companies roping in extra staff for the vote and at least one putting a cap on trades to avoid excessive movements.

Criticism of the deal is focused on an arrangement to keep open the border with Ireland by aligning Britain with some EU trade rules, if and until London and Brussels sign a new economic partnership which could take several years.

Sammy Wilson, Brexit spokesman with Northern Ireland’s Democratic Unionist Party, upon which May relies for her parliamentary majority, told the BBC his party would not be forced into backing the deal by fears over the border.

The government must set out what happens next by Monday, if — as is expected — it survives the no-confidence vote.

Speculation is growing on both sides of the Channel that May could ask to delay Brexit.

But a diplomatic source told AFP any extension would not be possible beyond June 30, when the new European Parliament will be formed.

The withdrawal agreement includes plans for a post-Brexit transition period until a new relationship is drawn up, in return for continued budget contributions from London.

Without it, and if there is no delay, Britain will sever ties with its nearest neighbours with no agreement to ease the blow. (AFP)