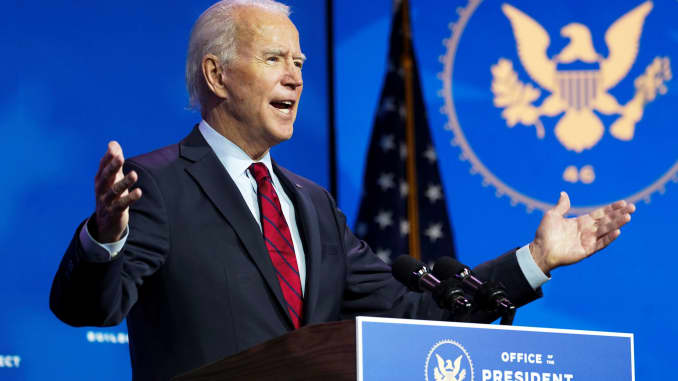 President-elect, Joe Biden will address the nation Monday night and say it’s ‘time to turn the page’ on the election, as Electoral College electors confirm he’s the winner throughout the day, reports Daily Mail UK

‘In this battle for the soul of America, democracy prevailed,’ Biden will say. ‘The flame of democracy was lit in this nation a lot of time ago. And we now know that nothing – not even a pandemic – or an abuse of power – can extinguish that flame.’

The president-elect’s speech will revolve around democracy, but he’ll also speak about the coronavirus crisis – the good vaccine news, but also the gruesome milestone of hitting 300,000 deaths in the U.S.

‘What beats deep in the hearts of the American people is this: Democracy,’ Biden will say. ‘The right to be heard. To have your vote counted. To choose the leaders of this nation. To govern ourselves.’

‘In America, politicians don’t take power — the people grant it to them,’ the president-elect will say.

Biden’s ‘abuse of power’ comment was a clear whack at President Donald Trump, who still refuses to concede the election.

The latest plot, articulated by White House aide Stephen Miller Monday morning, was to have Republican ‘electors’ gather in or near the statehouses where the actual Electoral College electors were meeting, to cast their own votes for Trump.

‘As we speak, today, an alternate slate of electors in the contested states is going to vote and we’re going to send those results up to Congress,’ Miller said on Fox & Friends.

‘This will ensure that all of our legal remedies remain open. That means if we win these cases in the courts, we can direct that these alternate electors be certified,’ he added.

But even Bernie Comfort, the Pennsylvania chair of the Trump campaign, admitted the vote wasn’t much more than a stunt.

‘We took this procedural vote to preserve any legal claims that may be presented going forward,’ Comfort said in a statement. ‘This was in no way an effort to usurp or contest the will of the Pennsylvania voters.’

And despite these shenanigans, Biden will call the election a success.

‘We the People voted. Faith in our institutions held. The integrity of our elections remains intact,’ Biden will say. ‘And so, now it is time to turn the page. To unite. To heal.’

Miller’s claim that ‘legal remedies remain open’ flew in the face of reality. Trump had seen the bid by Texas to overturn the election thrown out by the Supreme Court Friday and spent the weekend angrily tweeting that the nine justices lacked ‘wisdom and courage.’

And on Monday, the Wisconsin Supreme Court ended yet another Trump lawsuit against the results there, another defeat for the president who has seen dozens of lawsuits struck down since voting went against him.

By just after 5 pm Monday, Biden will officially become president-elect, sealing a victory which saw him take 81,282,376 votes compared to Trump’s 74,222,576 in the popular vote.

His victory was declared by major television networks on November 7, but has still not been acknowledged by Trump, who instead has spent more than a month furiously claiming the election was ‘rigged’ or ‘stolen’ and racking up dozens of defeats in court, with the Supreme Court hammering a nail in his coffin last Friday.

The Electoral College vote leaves Trump’s path to overturning the result one which is now essentially impossible: he will have to persuade both the House and the Senate to throw out the votes of the swing states.

Security was stepped up in many of the swing state capitols amid concern that the confirmation of Biden’s victory would lead to protests.

For example, Michigan’s legislative office buildings were closed to the public due to ‘credible threats of violence,’ state officials said Sunday night.

And state House member Gary Eisen, a Republican, was disciplined by his own party for saying he could not guarantee that certifying Biden’s win in the state would not lead to violence.

In Harrisburg, Pennsylvania, a handful of pro-Trump demonstrators protested outside the state capitol.

Once the vote is counted, the results will be sent to Washington and tallied in a January 6 joint session of Congress over which Vice President Mike Pence will preside.

The electors’ votes have drawn more attention than usual this year because Trump has refused to concede the election and continues to make baseless allegations of fraud.

On Monday morning, he continued to tweet wild allegations.

Answering a question posed by Fox Business Network’s Maria Bartiromo on Twitter, ‘Why did the Swing States stop counting in the middle of the night?’ Trump replied, ‘Because they waited to find out how many ballots they had to produce in order to steal the Rigged Election.’

‘They were so far behind that they needed time, & a fake ‘water main break’, to recover!’ Trump said.

A water leak occurred at a site in Georgia, but a top Republican election official said it had no impact on the vote tally.

Trump is attempting to undermine Biden’s presidency even before it begins.

No, I worry about the country having an illegitimate president, that’s what I worry about. A president that lost and lost badly,’ Trump said in a Fox News interview that was taped Saturday.

His move to introduce ‘alternate electors’ was ridiculed by George Conway, the anti-Trump husband of former White House Counselor to the President Kellyanne Conway.