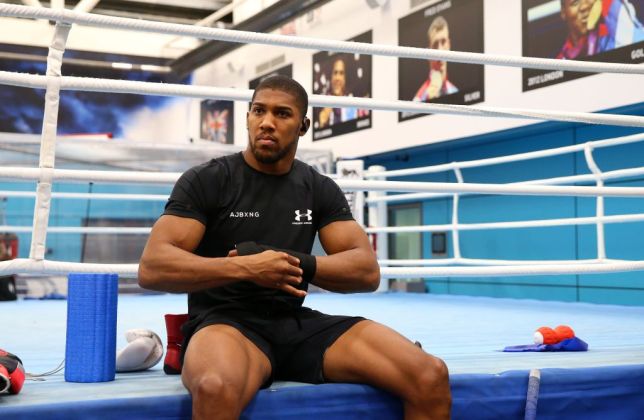 Anthony Joshua has warned Andy Ruiz Jr not to provoke him after his opponent labelled him a ‘big robot’ ahead of their fight in June.

Ruiz Jr aimed the dig at Joshua after it was confirmed the Mexican heavyweight would replace Jarrell Miller for AJ’s debut in America.

Joshua will fly out to America in the coming days and was surprised to hear Ruiz Jr was slagging him off just hours after their fight was announced. ‘Wow. he’s started his trash talk already,’ Joshua said.

‘You don’t want to talk because this robot will whoop him. I thought he was a cool guy and I was going to go in there and beat him up slowly. But if he talks reckless, I will batter him. You can’t push these buttons, I’ll punish you.’

Ruiz, 29, has just one defeat on his record and that was to Joseph Parker when the pair fought for the vacant WBO title in New Zealand.

The American-born Mexican believes he was robbed that night, Parker became champion thanks to a majority decision, and Ruiz Jr broke down how he will beat Joshua and claim the WBO title the Brit took from Parker. He said: ‘I think the fight is going toe-to-toe, two guys smashing each other’s faces. ‘I’m going in there to throw combinations like I’ve never done before, to improve my speed.

‘I think being so tall he fights like a big robot. I think with my style, my speed, my movement, I don’t think he’s fought anybody like me.

‘It’s going to be a whole different ball game. I’m going to bring the pressure, the speed, and the combinations to him.’