The order, titled Preventing and Combating Discrimination on the Basis of Gender Identity or Sexual Orientation, was signed just hours after the new POTUS assumed office on Wednesday evening.

It states that ‘Children should be able to learn without worrying about whether they will be denied access to the restroom, the locker room, or school sports.’

The order adds: ‘It is the policy of my administration to prevent and combat discrimination on the basis of gender identity or sexual orientation’.

There is now speculation that public schools will have funding pulled if they do not allow transgender female athletes to compete in girls’ sports.

Biden’s order is already dividing activists on the internet. While it has been cheered by proponents of transgender rights, others say the order could unintentionally discriminate against cis females.

Erielle Davidson of The Jewish Institute for National Security of America, wrote: ‘Sad day for women’s sports. Women must compete against biological males at the risk of injury and loss of title, thanks to a new Biden executive order. Don’t ever tell me this is ‘pro-woman.’ It’s not. It’s destructive and malicious.’

Soon after, the hashtag #BidenErasedWomen began trending on Twitter.

However, LGBT activists hit back, saying the order was simply Biden’s attempt at moving towards a more inclusive society – just as he pledged to do in his inaugural address.

‘I see #BidenErasedWomen trending so seems like a good time to remind everyone that trans people have been around in every recorded culture. Biden has simply said that he’s not going to allow people like me to be discriminated against for using female toilets, as we’ve always done,’ transgender writer Paris Lees posted.

Others claimed that criticism of Biden’s order was ‘transphobic’, and slammed the objectors as ‘trans-exclusionary radical feminists’ (otherwise known as ‘TERFs’).

The decision to allow transgender athletes to compete in sports alongside their cisgender peers has caused controversy in recent years.

Last year, 17 states introduced bills to restrict athletes’ participation to sports of their gender assigned at birth – however, only Idaho, has passed a bill into law.

Last March, the law signed in Idaho became the nation’s first to prohibit transgender students who identify as female from playing on female teams sponsored by public schools, colleges and universities.

The law was supported by President Donald Trump’s administration. 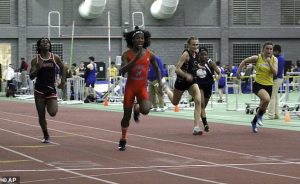 ‘It changes everything because it eliminates the connection between an athlete’s effort and her success. Idaho’s law helps make sure that, when women like me work hard, that hard work pays off, and we have a shot at winning.’

According to Transathlete, there are 16 states that’ have friendly policies that help facilitate full inclusion of trans/non-binary/GNC (gender non-conforming) students in high school athletics.’

Last year, the Trump administration attempted to intervene in Connecticut, threatening to pull funding from three school districts if they did not cut ties with the Connecticut Interscholastic Athletic Conference’.

The Conference’s policy caused controversy for allowing transgender athletes to compete in their girls’ track meets.

The Trump administration claimed the policy violated  Title IX –  a 1972 federal law that prohibits sex discrimination in programs that receive funding from the federal government.

‘Running has been so important for my identity, my growth as a person, and my ability to survive in a world that discriminates against me,’ she stated last year.

‘I am thankful that I live in Connecticut where I can be treated as a girl in all aspects of life and not face discrimination at school.’

Makinde to Yoruba activists: ’We won’t allow anyone to cause ethnic crisis in Oyo’