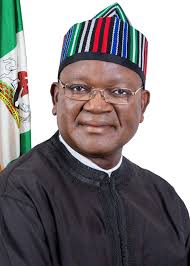 Governor Samuel Ortom of Benue State has donated a new 36-Seater Toyota Bus and N10 million to Lobi Stars Football Club of Makurdi as a source of encouragement and replacement for the players’ bus that was burnt beyond recognition while they were returning from Ilorin where they defeated Kwara United.

Speaking at the event which took place at Aper Aku Syadium, Makurdi, Ortom who was visibly happy while riding in the bus with the players and officiais.said the club has been able to make Benue proud in their outings.

He explained that the N10 million would enable the players replace their jerseys and other belongings that were burnt in the bus and assured that government would always stand by them in moments of trials.

While,promising to reward them handsomely if they win the professional league, the governor added thus : “Go and get the cup, then, I will show you Benue hospitality”.

Ortom said he was satisfied with the conduct of players within and outside Benue, stressing that he had to respond immediately to their predicament because their performance had impressed the people and government of the state.

Responding, the vice chairman of Lobi Stars, Mr Mike Idoko, said they were overwhelmed by the governor’s gesture and assured him that the players would as a result of the encouragement, strive to clinch the cup.

On Sunday, Lobi Stars would have an encounter with Kano Pillars at the Aper Aku Stadium, Makurdi. For about three weeks, Lobi Stars and Plateau United contested for leadership in the professional league.