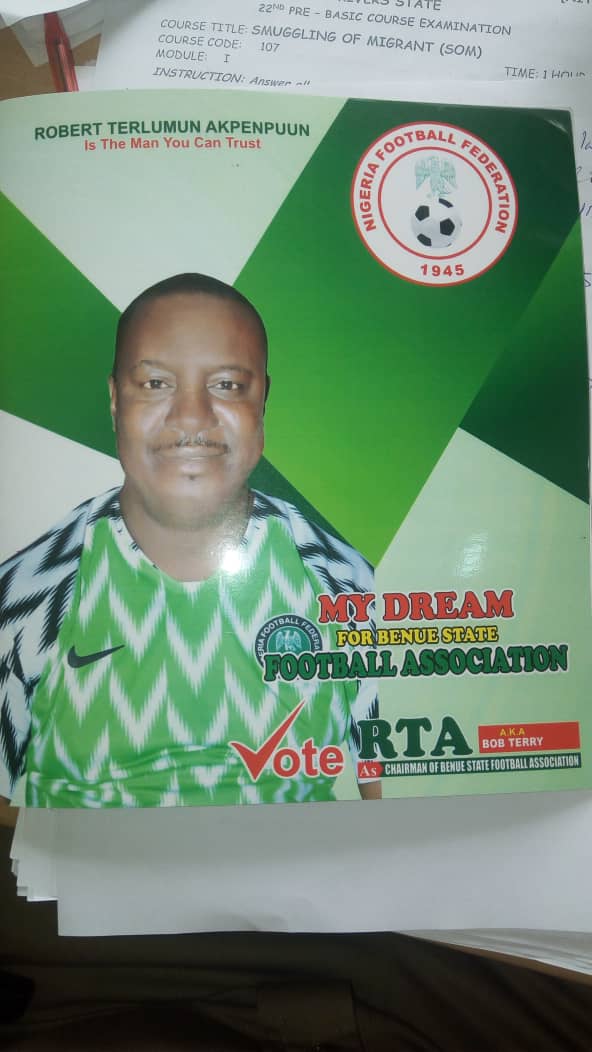 A chairmanship aspirant in the Benue State FA election, Robert Akpenpuun has protested what he called a “calculated step” aimed at disqualifying him from contesting the election billed for early next month.

Akpenkuun, in a petition addressed to the Secretary General of the nation’s soccer governing body, NFF urged the Glass House to intervene and create a level playing field for all aspirants.

The widely traveled Immigration officer noted that the Benue FA electoral committee in a bid to disqualify him came up with a clause in the electoral guideline that barred anybody still in public service from contesting the election.

According to the electoral guideline made available to The Nigerian Xpress Sports, under Eligibility, the electoral committee stated:

For the position of chairman, amongst other conditions, a candidate must not be in the employment of any government or its agencies or an aide to any government official.

Faulting the clause, Akpenkuun in his protest letter to NFF stated: “the 2015 guideline for election into the board of Benue State Football Association does not have such clause. In fact, the current chairperson was a Commissioner in the Federal Character Commission up till 2016…also, the NFF Executive Committee election guideline 2018 and NFF electoral code does not include the discriminatory guideline from the Benue State Football Association.”

Akpenkuun stated further that Benue State can not be different when …”currently many chairmen of the various state FA boards are serving public and civil servants.”

It would be noted that the NFF early this week released the timetable for the state FA elections, even as it urged stakeholders to show interest in the elections.