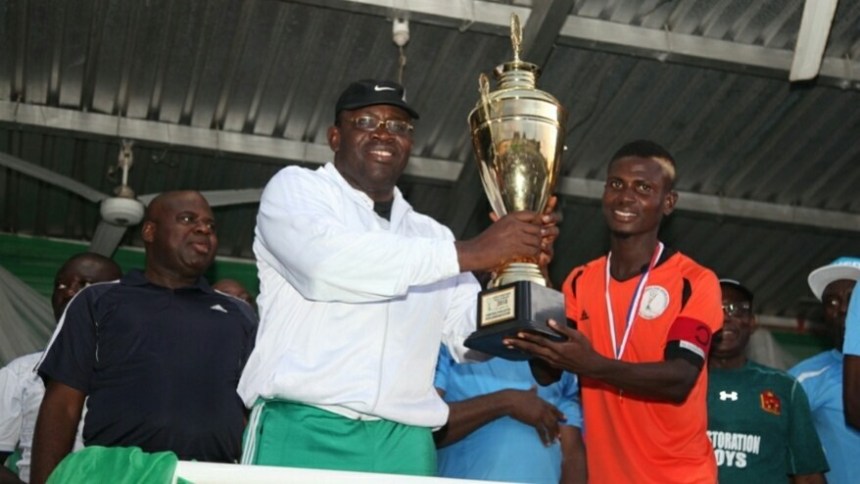 Three frontline Peoples Democratic Party (PDP) governorship aspirants in Bayelsa State have pledged that their administration would give priority consideration to sports development.

The aspirants, Senator Douye Diri, Dr. Nimibofa Ayawei and Barr. Kemela Okara, who are all seeking the sole ticket of their party to contest the November 16 governorship election, made the promise when organisers of the Restoration Cup presented the tournament’s branded jerseys to them.

The Tournament Director, Mr. Daniel Alabrah, who is also Special Adviser to the Bayelsa Governor on Public Affairs, quoted Senator Diri as saying that as a former Commissioner for Sports in the state, it is expected that sports would be prioritised when he becomes governor.

His words: “It is on record that during my time as commissioner in charge of the sports ministry, our sports men and women had a robust welfare package. I never compromised their welfare and wellbeing. At that time, Bayelsa United and Bayelsa Queens emerged champions of the male and female league respectively.

“Sports is a very important tool to positively engage our youths. A physically sound body produces a sound mind. That is the reason I exercise at least three days every week,” he said.

Diri commended the governor for enhancing unity and peaceful co-existence in the state through the Restoration Cup, which is also known as the Governor Henry Seriake Dickson Football Tournament.

While praising the organisers for lifting the Restoration Cup to the status of the biggest grassroots football tournament in Nigeria, Diri said he would ensure the competition is sustained and the name retained.

He added that his administration would focus on areas of sports that the state has comparative advantage like swimming, combat sports, football among others.

On his part, Dr. Ayawei noted that as a footballer himself, he understands the importance of sports in lifting the youths out of idleness, indolence and criminality.

He said a competition like the Restoration Cup has succeeded in bringing the youths of the state together and has become a good channel to discover talents that abound in the communities.

“Seeking out and positively engaging our youths is a lifelong commitment for me. So, sports and competitions like the Restoration Cup would be well supported and the welfare of our athletes prioritised,” he said.

The Chemist-turned tax man also spoke about his vision to further boost the internally generated revenue profile of state.

He said Bayelsa can have about N3.5bn IGR monthly once a road is constructed to the Brass island, which hosts an Agip oil terminal as well as a proposed fertiliser plant and liquefied natural gas projects.

These projects, Ayawei noted, can comfortably provide jobs for no fewer than 3000 youths.

Okara, who is the immediate past Secretary to State Government, described sports, and football in particular, as vital and a sure means of getting young people out of harms way.

“You cannot write off the huge multidimensional benefits that sports bring, whether in terms of character moulding or in the area of job creation because Nigerian footballers now earn millions of dollars.

“The Restoration Cup has come to stay. I am committed to this and will support it. I believe that by God’s grace, when I emerge as the governor of this state, I will invest massively in sports.”

In his remarks, Director-General of the Restoration Cup, Mr. Ono Akpe, commended the aspirants for their support, without which he said the competition would not have made good progress.

He solicited their continued cooperation to enable the organisers discover more football talents for the state and the country.

“Through this competition, we were able to take the Restoration Starlets to the Africa Youth Cup in Cape Verde, where they came third. That competition offered some of these young lads the opportunity to leave the state and flew in a plane for the first time in their lives.

“They returned to Nigeria and took part in the state league, which they won. Today, they are set to represent the state in the playoffs of the national amateur league,” Akpe said.

Collapse us if you can, British government dares Brexit opponents