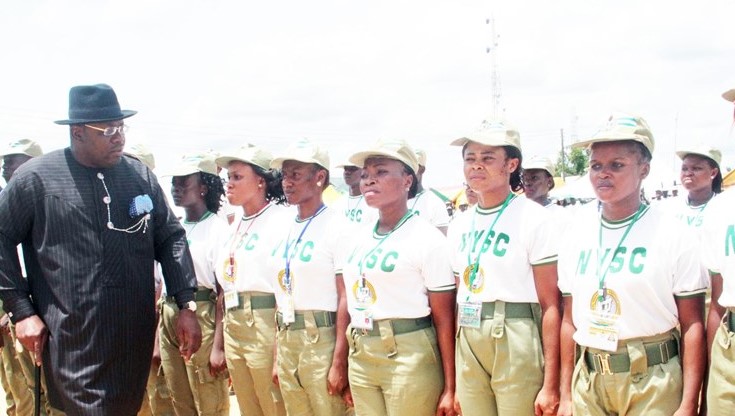 Governor Henry Seriake Dickson of Bayelsa State has charged corps members serving in the state not to succumb to intimidation or inducement by any politician or political party during the gubernatorial election in the state scheduled for November 2, 2019.

Governor Dickson stated this at the closing ceremony of the 2019 Batch ‘A’ National Youth Service Corps Orientation Course at Kaiama, Kolokuma/Opokuma Local Government Area of the state, on Tuesday.

In a press release by his Special Adviser on Media Relations, Mr. Fidelis Soriwei, the governor recalled that some opposition parties in the state took corps members on electoral duties hostage and forced them to write and sign fake results sheets out of desperation during the last election.

In the words of the governor, “Because I have the responsibility for your safety and well-being, later this year the governorship election will be holding in this state.

“Though I will not be directly participating but I want to advise that with what we know, there are politicians and parties who will intimidate you as you go out to perform electoral duties.

“Some will go as far as kidnapping, holding you hostage and forcing you to do things against the procedures and against the laws.

“I want to urge you to prepare to do what is right, give a face to the wishes of our people as they may feel free to exercise.

“Never be cowed or intimidated by anyone no matter how highly placed, you have our support.

“We provided emergency lines which have been given to you. Please acquaint yourself with them.

“The security investment in this state is as such that, if there is an incident, within three/four minutes, security operatives will get to you.”

The governor also advised the corps members to be safety-conscious and urged those who lack the capacity to swim among them to travel to riverine communities only with life jackets.

He also urged the corps members to acquire the skill of swimming which he described as a vital skill for safety.

He continued, “A number of you who cannot swim like us, I strongly record mend that you acquire the skill of swimming.

“Until you know how to swim very well, I want to advise that you acquire your mandatory life jacket before going to any of the communities in this stare which is largely riverine.”

He described corps members as Nigeria’s greatest resource, stressing that his government prioritises human capacity building and had invested in the youths, education and future more than any other government in the country.

Governor Dickson also charged the corps members to take advantage of the huge investments made by his administration in key sectors to render selfless service to their host communities.

Also, he announced that the next orientation exercise for corps members would hold at the permanent site of the camp where construction work was ongoing.

In her closing remarks, the state’s NYSC Coordinator, Mrs. Loto Bolade-Omolayo, appreciated Governor Dickson and key members of the Restoration administration, including the Secretary to the State Government, Kemela Okara, Senior Special Assistant to the Governor on NYSC Matters, Suoyo Appah, for their unprecedented support towards ensuring a successful orientation programme.

Also, the NYSC State Coordinator, who advised that they shun cultism, drug abuse, prostitution and armed robbery, encouraged them to initiate, execute and inaugurate viable projects that would positively impact on their host communities.

She said the orientation exercise was hitch-free and urged the corps members to take their posting as the will of God, report for duty where they are posted, imbibe diligence, obedience, respect and hard work as virtues.