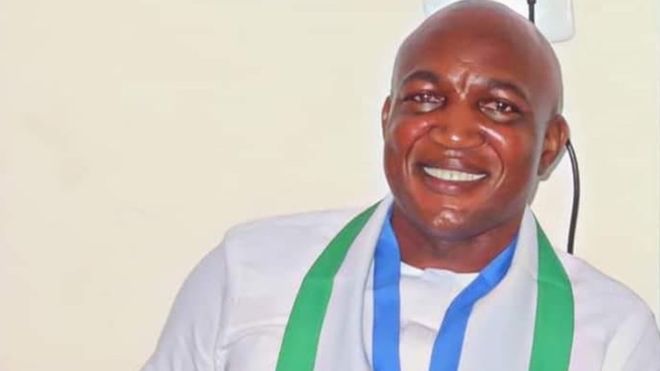 The All Progressives Congress (APC) in Bayelsa State, on Sunday, took its community-by-community 2019 governorship campaign to the ancient cities of Ogbolomabiri and Bassambiri in Nembe Local Government Council.

The party promised to provide electricity for the area if voted into power comes November 16th.

In a statement by the Secretary of the Media and Publicity Committee, APC Governorship Campaign Council, Doifie Buokoribo, the governorship candidate,  Chief David Lyon, also promised to provide security that would attract investors and create jobs for the many unemployed youths at a rally at King Koko Square in Ogbolomabiri.

Lyon further urged the people of the area not to succumb to any attempt by the incumbent Peoples Democratic Party (PDP) government to buy their votes.

According to Buokoribo, the candidate  said the PDP, knowing it had lost the trust and support of the Nembe people,  resorted to falsely accusing the people of the area of chasing away their own brothers and sisters but “as we can all see today, Nembe is at peace with self, contrary to the many lies the PDP is trying to spread.”

While interacting with Opu Nembe Council of Chiefs at the First Nembe Town Hall in Bassambiri, Lyon thanked the people  for the overwhelming support they gave the APC during the last Presidential, National and State Assembly elections in state in spite of intimidation from the PDP state government.

He said because the people have suffered from total neglect by government as a result of their support for the APC, he would ensure that the swampy areas of Bassambiri  are sand-filled in order to create room for further expansion of the city.

“I am aware that you have suffered untold hardship in the hands of the PDP led government because of your support for the APC. And for this act of yours, once I become governor, your community would be among the first to benefit in terms of project.

“I want you all to remain focused, continue to support the APC and stand by that change you desire in the governance culture of our state. As you all know, I have respect for traditional institutions and as I stand here to make these pledges before the monarch of this kingdom, I assure you that I will not fail.

“But today, you don’t have anything to show for it. Oil exploration activities have destroyed your traditional means of livelihood, which is fishing and farming; yet the state government has failed to provide alternative means of livelihood for you”.

On his part, Senator Nimi Barigha-Amange enjoined the people to work hard and vote for the APC in the November 16th election.

“The APC candidate, Chief Lyon has the requisite knowledge of the challenges facing our people unlike the PDP candidate.

” Lyon is the very best that the APC has presented to the state to offer selfless service to the people and when sworn-in, he would improve the lives of the people of the area”, he said.

Earlier in his address, the founder of Ottita Force, a political support group, Prince Gabriel Jonah, promised 100 per cent vote for the APC in the forthcoming governorship election.

Prince Jonah, the younger brother of deputy governor of the state, Rear Admiral Gboribiogha John-Jonah (rtd.), said the people of Nembe Kingdom decided to give their total support to the APC because the PDP led government had not shown any form of respect and regard for her people in government and civil service over the years.