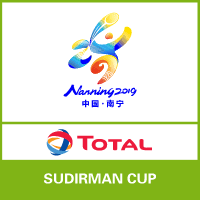 Team Nigeria Thursday evening made history when they defeated Mauritius to claim gold medal in the mixed team event of the All Africa Senior Badminton Championships on Thursday in Port Harcourt, Rivers State.
The victory means Nigeria has landed in Nanning, China where they would be flying Africa’s flag in the BWF Sudirman Cup (World Cup) billed to run from May 19-26.
It was the coveted medal and the west Africans claimed it in a dramatic way.
Aanuoluwapo Opeyori and Dorcas Adesokan were the stars, they displayed impressive form to inspire Nigeria to the victory.
Opeyori started the onslaught when he secured a 21-11, 21-13 against hard-fighting Aatish Lubah in the men’s singles.
The Nigerian number one had somewhat easy first set but got it pretty tough in the second; the Muaritian raced to a four point lead maintaining that until the interval when the Nigerian used combination of incredible footwork and strong forehand to undo his opponent and won the set 21-13.
The second match was really destined to be a difficult one for Team Nigeria, Deborah Ukeh was to face the Africa’s number one in the women category, Kate Foo Kune. In less than 30 minutes the Mauritian had handed down a 21-12, 21-16 defeat to the Nigerian. The tie stood at 1-1 apiece.
Mauritius opened a lead when Lubah combined forces with top seed, Georges Paul, to seal a 21-16, 16-21, 21-11 over the duo of Enejo Abbah and Clement Krobakpor to make it 2-1.
Adesokan paired with Ukeh to restore parity when they dispatched Aurelie Allet and Loma Botha 21-8, 21-10 in the women’s doubles to set the stage for the final match.
The atmosphere at the Indoors Hall of the Ditte Spiff Civic Centre was electrifying, the tension was high as the duo of Opeyori and Adesokan stepped into the court to face Paul and Kune in the mixed doubles.
It was the best of Nigeria against the best of Mauritius and the tie lived up to its billing, extremely close match that ended 21-19, 21-19 in favour of the hosts to send spectators into frenzy.
“This is the best day of my career,” Opeyori said after the game. “I was jittery this morning but my coach and mates urged me on and I am happy I didn’t disappoint.”
“One of the most beautiful things about this victory is that Nigeria will represent Africa for the first time at the Sidiman Cup in China, we are the champions of Africa,” an elated President offthe Badminton Federation of Nigeria Francis Obih said.

NNPC says has no plans to relocate NGMC to Abuja