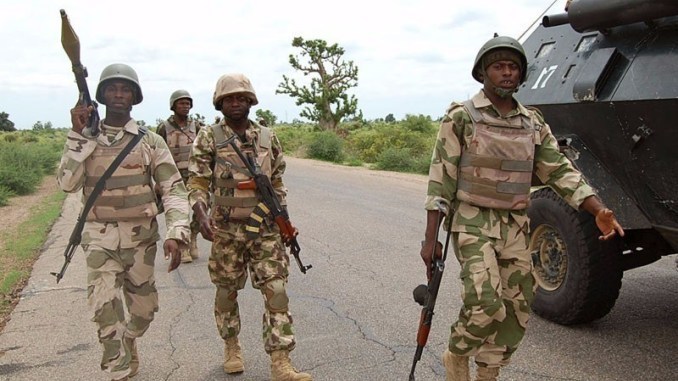 At least 100 soldiers were reportedly killed, while scores others were still missing when fighters ambushed the Nigerian troops on Operation AYISO TAMONUMA  against Islamic States West Africa Province (ISWAP) positions in the Alagarno area of Borno State, on Monday.

Claimed that fighters ambushed the rear section of the convoy where the Multi-barrel Rocket launcher (MBRL) system and a Sino tipper truck carrying soldiers was positioned.

The tipper trucks, popularly known as ‘Yellow Bucket’, were attacked with a rocket-propelled grenade (RPG) killing over 40 soldiers.

The trucks were converted into troop transport carriers to fill the deficit of military standard troop carriers and inadequate Mine-Resistant Ambush Protection vehicles.

Sources confirmed that the ambush, involving RPG fire and other weapons, led to the death of almost 100 soldiers, including three officers, a Battalion Second-in-command and Air liaison officer.

Four hunters supporting the operation were also killed during the attack. An unknown number of soldiers were abducted and those injured in the ambush were evacuated for medical treatment.

This attack comes three weeks after a similar attack in Goniri in Yobe State resulted in the destruction of several military vehicles worth millions of naira and casualties.

Details of the names and units of the dead, injured or abducted are not known yet as the military and government have not acknowledged the attack.