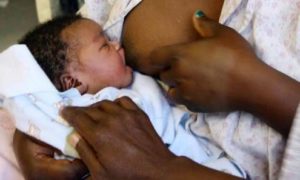 UNICEF, and the World Health Organisation (WHO) has expressed concern over the activities of baby food producers who allegedly use COVID-19 as a cover to discourage exclusive breastfeeding to increase patronage of their products.

Both agencies noted with grave concern the drastic drop in the rate of exclusive breastfeeding in some countries of the world following misinformation by some baby food manufacturers that covid-19 could be transmitted through breastfeeding.

“In many countries, the pandemic has caused significant disruptions in breastfeeding support services, while increasing the risk of food insecurity and malnutrition.

Several countries have reported that producers of baby foods have compounded these risks by invoking unfounded fears that breastfeeding can transmit COVID-19 and marketing their products as a safer alternative to breastfeeding.”

UNICEF and WHO in a joint press statement on this year’s exclusive breastfeeding week said that only three out of every 10 children in Nigeria are exclusively breastfed.

According to the statement signed by UNICEF Executive Director Henrietta Fore and WHO Director-General Dr. Tedros Adhanom Ghebreyesus, the proportion of children who are not breastfeeding increases on daily basis.

It read in part: “Available statistics in Nigeria reveal that the average duration of exclusive breastfeeding is approximately 3 months and only 3 out of every 10 children under 6 months of age were exclusively breastfed (29%).

UNICEF and WHO called for renewed efforts in exclusive breastfeeding which they insisted is critical for the survival and health of children.

“Initiation of breastfeeding within the first hour of birth, followed by exclusive breastfeeding for six months and continued breastfeeding for up to two years or beyond offer a powerful line of defence against all forms of child malnutrition, including wasting and obesity.

“This year’s World Breastfeeding Week, under its theme ‘Protect Breastfeeding: A Shared Responsibility is a time to revisit the commitments made at the start of this year by prioritizing breastfeeding-friendly environments for mothers and babies.

UNICEF and WHO urged baby food producers to abide by the international protocols on the marketing of baby formula.

“Ensure that the International Code of Marketing of Breastmilk Substitutes – established to protect mothers from aggressive marketing practices by the baby food industry – is fully implemented by governments, health workers and industry.”

“As we approach the UN Food Systems Summit in September and the Tokyo Nutrition for Growth Summit in December, governments, donors, civil society and the private sector all /have an opportunity to make smart investments and commitments to tackle the global malnutrition crisis – including protecting, promoting and supporting breastfeeding – through stronger policies, programmes and actions.”