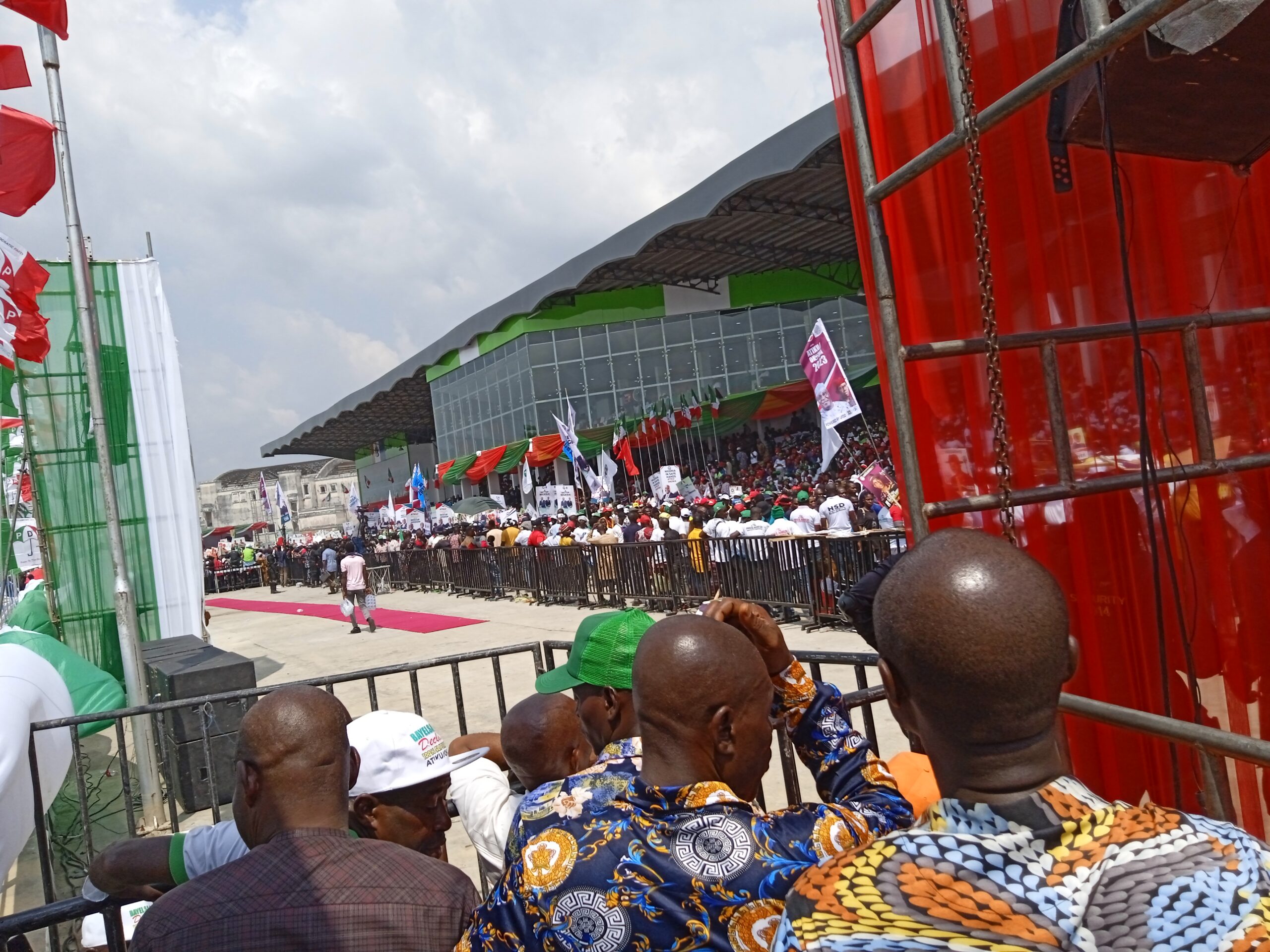 Atiku who arrived the Campaign arena at 2.47p.m. in company of the Presidential Campaign Council promised to execute five major  programmes for Nigeria if elected as President .

Atiku, who lamented that Nigeria was currently divided along various lines, however, said he would ensure the unification of Nigeria  by giving every part of  the country a sense of belonging.

“The Unification of Nigeria is my number one programme. I will give every part .of this country a sense of belonging.”

Atiku added that he would restore the security of Nigeria, tackle the country’s economy by creating jobs for the youths, to also stop the incessant ASUU strikes and restructure the country.

He urged Bayelsans not to leave the PDP because  the state has been part of the party since the commencement of democratic governance in 1999.

He continued, “Therefore I am calling on the people of Bayelsa state not to leave PDP because Bayelsa is PDP and PDP is Bayelsa

“PDP has provided you governance  , you have provided President, everything in Bayelsa is PDP.

According to the PDP Presidential hopeful,  ASUU strike would  be a thing of the past  as his government will  “make sure our women are educated, to ensure that our children go to school without any interruption” Atiku added.

The Vice presidential Candidate of the Party, Governor Ifeanyi Okowa of Delta State,  who spoke in the  same vein  said voting  out PDP in 2015 was a mistake Nigerians made and vowed to reclaim the Presidency in the next election.

“Voting out PDP was a mistake Nigerians have made. We will reclaim the Presidency

” Go out and deliver at list five million votes,” he appealed and also lamented that the division in the country is so much, Atiku will unite the country.

“The division in the country cannot continue to go on. Atiku is the only candidate who has made commitment to restructure Nigeria. Vote for PDP to restore peace in Nigeria”.

The national Chairman, Prof. Iyorshia Ayu, in his remarks appealed to Bayelsans to vote for PDP, because the  party  knows the problems of the state more.

“Vote for PDP, we know the problems of Bayelsa State. We will stand by you,” added Ayu who also received some decampees from the All Progressives Congress and advised the state PDP to “rehabilitate them and make them comfortable’.

Also in his speech, Bayelsa state governor Douye Diri who commended  Bayelsans for coming out in large numbers  noted that it’s not a campaign but a victory rally , and assured that this will be replicated at the polls next month .

‘”Today is a carnival, not campaign rally, thank you for coming in large numbers to support our incoming president and Vice President”

Other dignitaries that spoke in the same vein included Governor Aminu Tambuwal of Sokoto state who is also the Director General of the Presidential Campaigns, Governor Udom Emmanuel the Chairman of the PCC, and former Governor Seriake Dickson who also assured that Bayelsans will vote massively for Atiku come February.

Several notable PDP top shots were present at the rally, Dino Melaye, and others.

A young man, by name Henry , who donated his two months salary to Atiku/ Okowa says after consulting with his family members he decided to make the donation to ensure the victory of the duo at the polls.

A one minute silence was observed for the   first executive  governor of Bayelsa state, the late DSP Alamieyeseigha.