Rector of the College, Brig.-Gen. Yahaya Abdulhamid revealed this when he paid a courtesy visit to the Director National Centre for Artificial Intelligence and Robotics, Engr. Ya’u Garba Isa, recently, in Abuja.

Gen. Abdulhamid said that the idea to partner with (NITDA) was borne out of the impact the agency had been making in areas of emerging technologies adding that the Nigerian military is resorting to the use of robots and drones to gather intelligence in order to outsmart bandits and other criminals terrorising the country.

In his response, the Director (NITDA), Engr. Isa said collaboration with the military would open a huge opportunity for the centre to explore in manufacturing of locally made military hardware that will be used in fighting criminal elements. 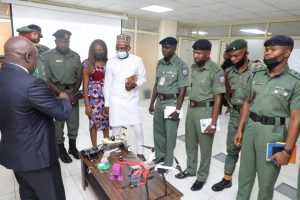 He said NCAIR would join forces with the Nigerian Army to use modern method of intelligence gathering to address security challenges bedeviling the country.

He disclosed further that the initiative would also provide first-hand intelligence gathering to the Nation’s security architecture using technology and digital-driven methods that will end  the incessant security threats in the country. 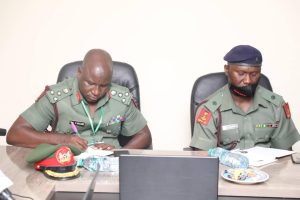 Engr. Isa pointed out that NCAIR, as digital innovation and research facility, is focused on Artificial Intelligence (AI), Robotics and Drones, Internet of Things (IOT)and other emerging technologies that can be deployed to a mission area so as to provide intelligence report.

He added that the centre is also looking into the possibility of producing what they termed as ‘Digital Grenade’ that can be used with ‘Wireless Censored Network’ in detecting some vital information in the field during operations. “NCAIR focuses on creating a thriving ecosystem for Innovation-Driven Entrepreneurship (IED), job creation and national development”, he said. 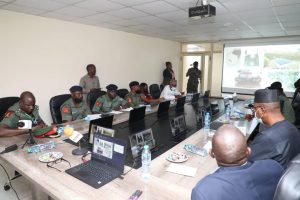 He assured the management of the Nigerian Army College of Environmental Science and Technology of the officer’s unflinching support towards the realisation of the mutual collaboration that will bring a suitable environment for discovery and harnessing the abundant creative ideas of Nigeria’s teeming youth through the promotion of innovation technologies.