Aregbesola bombs Tinubu, says ‘You put himself in place of God’ 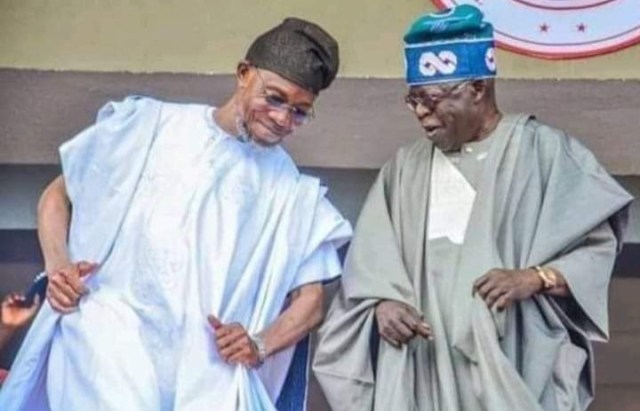 Minister of Interior, Ogbeni Rauf Aregbesola has finally hit hard his estranged godfather, Asiwaju Bola Ahmed Tinubu, over the crisis of the ruling All Progressives Party (APC) in Osun State. During a speech Aregbesola delivered, on Monday, at Ijebu-Ijesa area of the state, tore violently into Tinubu and told him that the same treatment meted out to a former Lagos State governor, Akinwunmi Ambode, which foreclosed his re-election bid in 2019, would be administered on his brother and Governor Gboyega Oyetola.

Although for the 21 minutes and 12 seconds that he spoke, Aregbesola did not at any point mention Tinubu’s name, he, however, made ignoble passes at him in relation to the political situation in Osun State, including how he has abused his leadership and suddenly assumed the god complex.

Below are the transcription and translation of Aregbesola’s address, which he delivered in the Yoruba language. Excerpts:

“I’m happy that we sent for you all and you honoured our invitation. Those we specifically asked to be invited here are party leaders from the Ward level to the state. They are the critical stakeholders and I’m certain they are the ones here.

“Although some, who are not with us would be here also – the informants to the other camps. But we’re no longer afraid of no one at this stage except God. You’re at liberty to listen to whatever we say here and go share with them over there. And I’m happy you’re here.

“However, if we have to throw the cards open and start all over again, this party is ours. Let me repeat myself for clarity: this is the core Afenifere – a progressive group, that genuinely loves the people, the society and also loves itself. I’m not talking about cosmesis good. This is Awolowo’s group; it is Bola Ige’s group. It is also Baba Akande’s group before he partly left us.

“We joined you in this same group in 2004; the group we laboured in pain and anguish to put together from 2004 to 2010, November 26, before the court gave us victory. This is the same group. Therefore, stop calling yourselves a faction; you are the main APC. Let me put it more succinctly, if our great leaders, who had passed on, had the opportunity of returning to this life, it is this same party they would join. They would not join a party that is not theirs.

“There’s no latter-day member here. Everyone here started with us from day one. Even if some had left at some point, we knew why they left. There’s no one here, who did not suffer with us. That’s the summary of my submission; that they have returned to where they’ve always belonged, and to also return the party to where it should be because we had hitherto followed the instructions of our leader, whom we thought was true to type.

“We followed and served this leader with all our might. In fact, our loyalty to him had caused some people to start wondering if we were no longer Muslims. But we were with him and served him according to the admonition of our forefathers, who said when serving anyone, we should do so with sincerity and loyalty; that if you regard anyone as your principal, you must serve him wholeheartedly.

“Sadly, we didn’t know that while we wished him well, he didn’t think good of us. However, because we placed him higher than where he ordinarily should be, he started to think he is our god. Unfortunately, for him, we had sworn to God that whoever compares himself to Him, we’d beg Him to bring down such a fellow.

“God says he does not have a rival, and if you heard what I said in Arabic, God said, ‘He is God and he didn’t have to start procreating before He’ll assume His place as God; that only humans procreate. You are the ones, who attach importance to procreation.

“As God, He doesn’t need a child to dwell in his glory. He does not need any family member or younger siblings to regale in His majesty. That He does not even need a group to be who He is. That He is God and that’s who He is. So, whoever puts himself in place of God, well, let him be his own god.

“With suffering, pains and perseverance, we nurtured this party to the stage it is – with sweat, tears, blood and even lost lives. It is by God’s grace that someone like me didn’t pay the supreme price too. May those who lost their lives to the struggle find peace with the Lord. (He mentioned names of some of those who died). As tough as it was, we did not seek revenge.

“We took over government on November 27, 2010, and by 28th, we announced that whoever sought revenge would be struck down by God. We only handed over to God, those who made us suffer. After we served for eight years, it wasn’t only party members that benefitted from our administration, the entire state did. I went everywhere in Osun with projects.

“However, by the time my successor was handed over to me around May or July 2018, I was told, ‘Rauf, this is the ideal successor that would stand by you. He would further showcase your efforts. He would not betray you; he would not dim the light of your glory’. That was what the person, who handed him over to me said. If the person is listening to me, it would resonate with him, if he said so or not.

“But, did he do as he was vouched for? And when he reneged on these promises, did the person, who handed him over to me draw his attention to these failings? Anyway, isn’t the person the one we now see today?

“Meanwhile, we are here at this station on three grounds and if we go about it honestly, we’d never regret this. The first is, God detests hypocrisy. That He is above all things, but hypocrisy, he’d never got close to. However, our prophet, Mohammed (SWA), said: ‘Assist the hypocrite and the victim of hypocrisy.

“But when asked to clarify the logic behind such a statement, he answered and said, ‘Listen, it is possible for a hypocrite not to know he is one. However, those of you around should endeavour to join forces with the victim of hypocrisy to prevail over the hypocrite and that way, you would have assisted the hypocrite to change his ways. That’s the first reason we are here and once we can do that, we’d be good to go and they would be the loser. It’s God’s commandment.

YOU MAY ALSO LIKE: http://Senate President, Yobe gov. on condolence visit to Sokoto

“Second, we are the ones looking after the people in every way possible. However, those we put into the position of authority to drive the project of caring for the people, have since abdicated this responsibility and we would never share space with such fellows. God says whoever is against the needy is His enemy. To that extent, we have to move away from these people, because we can’t because our association with them offend God. If we stick to this, we’d prevail.

The third reason is, the things we did that the people wanted, which, unfortunately, this man has turned away from and which formed the pride of our government, and which has been the thrust of our party since the days of Awolowo, we would not sit by and watch a fellow, who had no clue about this task, to destroy our efforts.

“We will never assist such a fellow. In a worst-case scenario, we’d move away from them. Interestingly, in every group, everyone has a right to their choices. But in making those choices, you must be sure a majority of the members align with you.

“It is possible some share your ideas and it’s also possible some do not. This happened in Lagos recently. There was a governor, who wanted to seek re-election and the party declined and showed him the way out with their votes. So, the same way it was in Lagos then, is exactly the way it is in Osun today. What is good for the goose, is also good for the gander. It cannot be the turn of your younger brother now and you change the rules.”