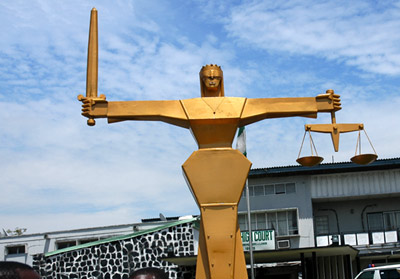 A Grade I Area Court in Lugbe , Abuja, on Tuesday sentenced an applicant, Ikenna Samuel, 24, to eighteen months imprisonment for defrauding an alien of N510,000.

The Judge, Abubakar Sadiq, sentenced Samuel after he pleaded guilty to cheating.

The judge also ordered the convict to pay N270, 000 to the complainant as compensation.

The judge said that the punishment would have been stiffer if the convict had not saved the court the rigour of protracted prosecution.

He also warned the convict to desist from committing crime in the future and to be of good behaviour.

READ ALSO: http://Impeachment trial of Trump to get under way

Earlier, the prosecutor, Mrs. Ijeoma Ukagha, told the court that Mr. Don Pedro, an Asian, reported the matter at the Lugbe Police Station on November 29, 2019.

Ukagha said that in 2019 the convict deceived and convinced the complainant to invest in his business.

Ukagha told the court that the complainant sent N510, 000 to the convict hoping that he was a genuine businessman.

The prosecutor said that immediately the convict got the money he blocked the complainant on his phone and converted the money to his personal use.

She informed the court that the police tracked and arrested the convict behind Amac Market Lugbe, Abuja.

The prosecutor said during police investigations, the convict confessed to the crime.

The offence, she said, contravened the provisions of sections 312 and 322 of the Penal Code. (NAN)