APC supporters protest over killing of member in Imo 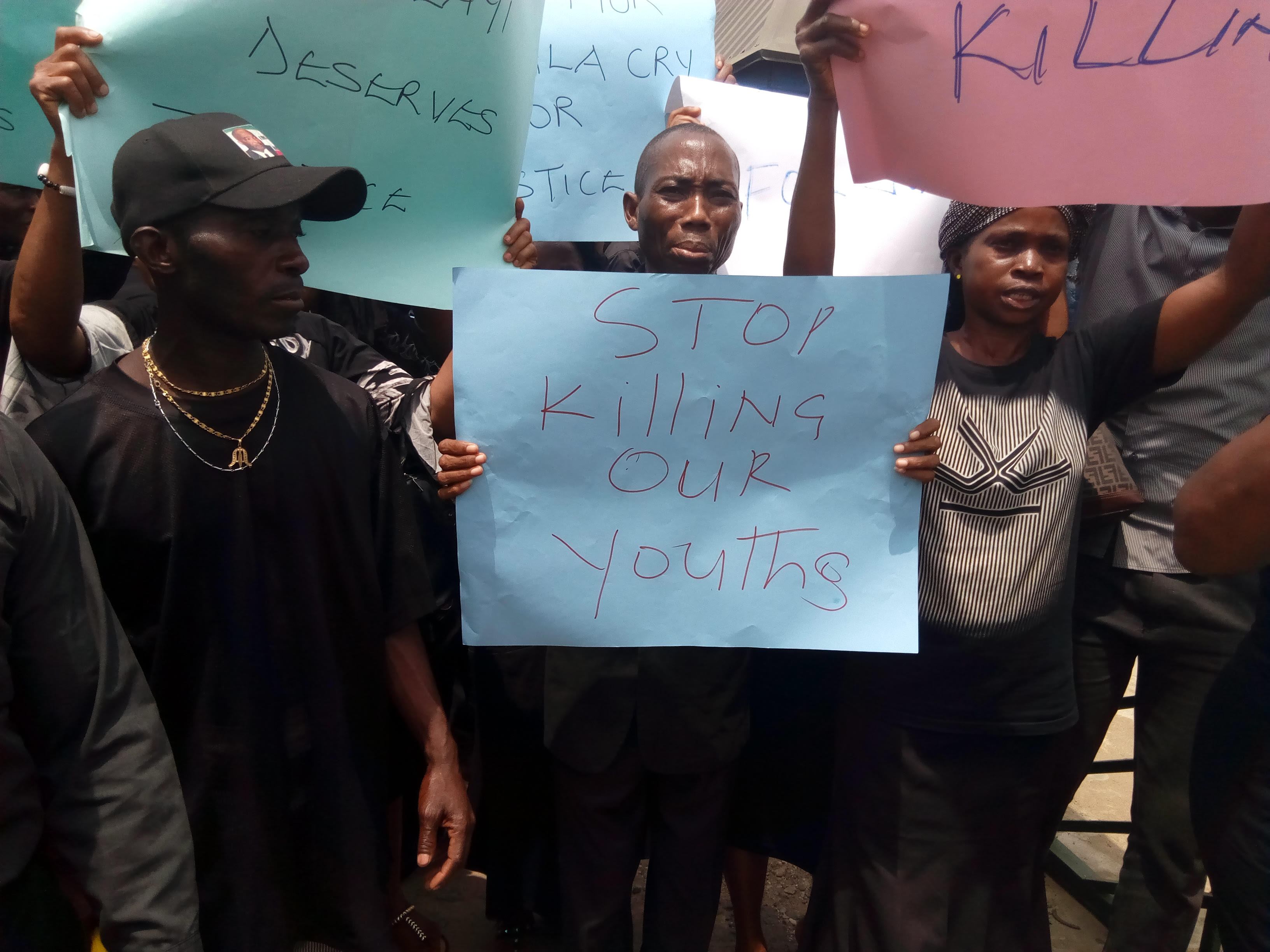 Protesting members of All Progressives Congress (APC) from Umuohiagu/ Logara political Ward in Ngor Okpala Local Government Area of Imo State have stormed the state’s Police Command Headquarters, in Owerri, over the gruesome murder of its chairman, Mr.Ifeanyi Odoemena.

The protesters, in large numbers, appearing in black upon black attire, and made up of men and women including youths, carried placards with inscriptions ‘APC  Ngor Okpala cry for justice’, ‘stop political assignation in Ngor Opkala’, ‘Owelle save us’, ‘Security agents save us’, also matched to some streets in the city

In a letter of protest jointly endorsed by the LGA chairman of APC Hon. Anaelechi and 10 other leaders of the party including, Dr. Toe Ekechi, Chief Enyinaya Onuegbu and Chief Val Okere (Amadioha) and read to newsmen, the group drew the attention of the Police to the unwarranted murder of their brother by unknown gunmen on Tuesday, February 19, 2019.

The group vehemently condemned the “senseless and heinous murder of Mr. Odoemena right in front of his wife and children” blaming his assignation as politically motivated and sponsored killing.

They recalled that similar incident had occurred in 2015 general elections where another young promising and enterprising son of Ngor Okpala, Hon. Andrew Ugwuesomba, who was a House of Assembly contestant of Labour Party, was murdered in cold blood

They pointed out that in the same 2015 election into Imo State House of Assembly in particular, Ngor Okpala recorded various degrees of high profile political assassinations in the Onyeaghala Nwanneye Court Area.

They group pointed an accusing finger on the one of the opposition party Action Alliance in the council whom they alleged to have mobilised into their area heavy presence of hired armed tugs for the purpose of the election.

They regretted that in spite of their report to the leadership of the party in the state, the hoodlums are still parading the entire landscape of Ngor Okpala with the aids of some security agents assigned to certain politicians in the area

The members called on the Nigerian Police and other law enforcement agencies, including the Governor Rochas Okororcha and traditional rulers, to rise up to the occasion to unveil the perpetrators of this ugly trend in order to avert further bloodshed in Ngor Okpala.

They also revealed that the penciling down of some notable APC leaders in the area and across the ward for possible harassment, intimidation and elimination where necessary.

Responding to the call by the APC protesters, the Imo State Commissioner of Police, CP Dasuki Galadanchi, assured for the arrest of those fake soldiers behind the assassination.

He recalled that the ward chairman was murdered by a 4 man gang gunmen wearing Military uniform who were operating with SUV car assuring that the command has commenced investigation and would surely nib the perpetrators of the crime in the bud.

He appealed to the group to remain calm and assist the police to make sure those who killed their brother are arrested within the shortest possible time.

Meanwhile, the entire community have been jolted over the murder of the APC ward chairman as they all woke up at the morning of that fateful day to hear of such unfortunate news when it filtered into the city.