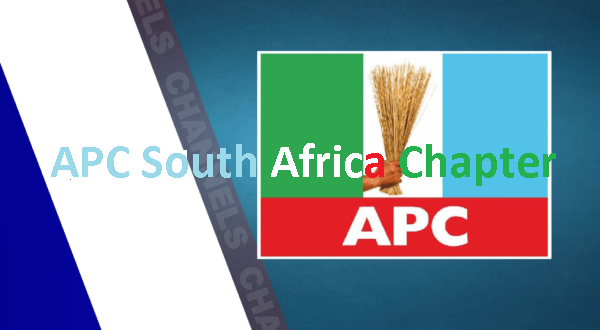 The All Progressives Congress (APC) South Africa Chapter, has congratulated Sen. Ahmed Lawan and Mr Femi Gbajabiamila over their emergence as Senate President and Speaker, House of Representatives respectively.

The group, in separate letters jointly signed by Mr. Bola Babarinde and Prof. Folorunso Fasina, the Chairman and Secretary respectively, and made available to newsmen on Sunday, set agenda for both chambers.

According to the group, winning elections again and again by Lawan and Gbajabiamila to represent their people is not a small feat and shows the confidence the people reposed in them.

“This is a confirmation of the trust reposed in you by not only the APC but also the opposition parties and your colleagues. We have come to a conclusion that our Great Party, the APC made no mistake in your choice.

“We are aware of your numerous contributions and achievements in the private and public sectors, human resource development and policy formulation.

“We wish to remind you that as persons that have been placed in positions of trust, you can give APC a brighter future by the way you run your administration.

“Furthermore, as academia and intellectuals, a lot of people are expecting too much from you and you cannot afford to fail us, ‘’ the group said.

The group expressed delight in the contents of their inaugural speeches, stressing that they were focused and to the point.

“We believe you will be able to carry out the contents and much more beyond what was listed as challenges, may present you with different options.

“We wish to remind you that you must learn from the errors of your predecessors in office, particularly the error of the President of the eight Assembly.

“Serving as the representatives of the people in the legislative capacity should not mean a regular affront and near constant confrontation with the Executive arm.

“At the same time, it does not mean that the legislature should kowtow to the Executive. The interest of Nigeria and the people should supersede every other interest and the yearnings of ordinary Nigerians must be brought to reality,’’ the group said.

According to the group, as the presiding officers of National Assembly, Lawan and Gbajabiamila now represent not only their primary constituencies but the entire country and must obey standing orders.

The group reminded the senate president and the speaker to address various pending issues such as diaspora voting and welfare of Nigerians in Diaspora.

Other issues according to them, include security and fighting the rising insurgencies and criminalities, economy and ease of doing business, among others.

“We as a country has come to a point wherein politics must be kept aside and serious considerations must be given to this particular issue.

“Traveling home nowadays is with utmost trepidation based on what we read constantly on the social media space.

“We believe that the legislature should work closely with the executive and the security agencies to put a finality to this ugly trend.

“If need be, joint security briefings must be held regularly to review activities,’’ the group stated.

The group noted that Nigerians believed in the NASS leadership, hence their watchword should be service delivery.

“Your tenure and the current government should leave a legacy that will further deepen citizens’ relationship and trust in our great party, the APC.

“Let the APC leadership under you be all-inclusive and govern in such a manner to naturally silence your adversaries and oppositions,’’ the group said. (NAN)