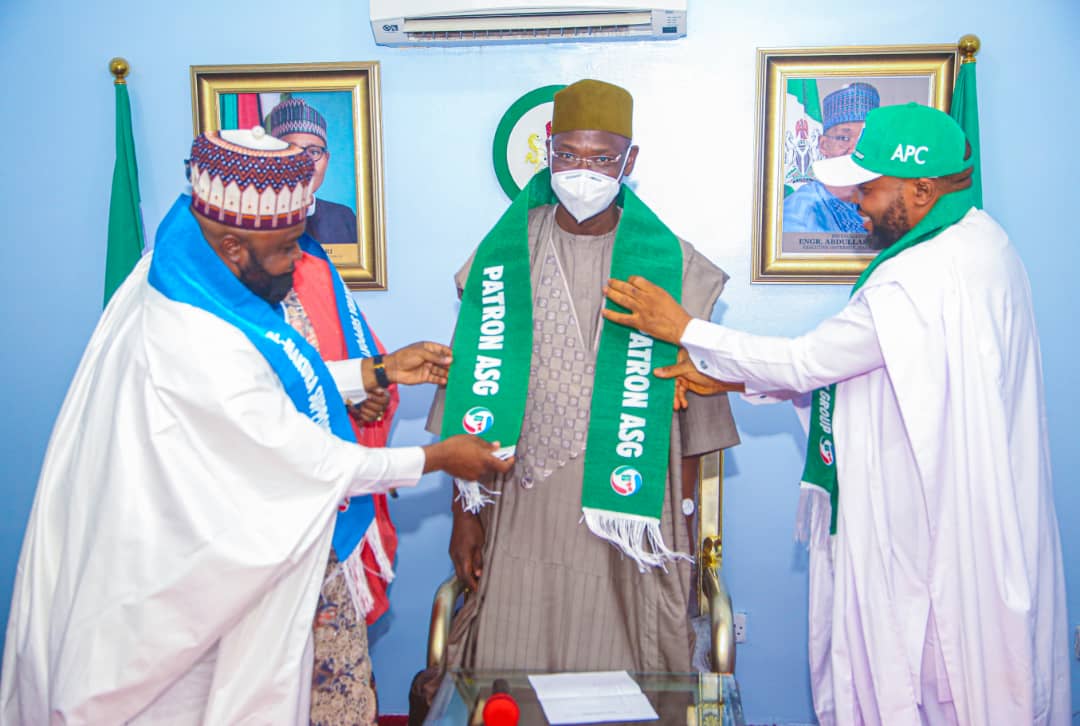 Governor Abdullahi Sule of Nasarawa State has emerged sole patron for the Al-makura Support Group, advocating for Sen. Umaru Tanko Al-makura to become the next national chairman of the ruling All Progressives Congress (APC).

The group announced Governor Sule’s nomination as its Patron, while on an advocacy visit, at the Government House, on Monday.

Director General of the Al-makura Support Group, Dominic Alancha, said the group is convinced that the Governor is committed to ensuring the emergence of his immediate predecessor as the next national chairman of the party, since his open advocacy in the media for the North Central and the Congress for Progressive Change (CPC) block, to produce the next national chairman of the APC.

“We are here to render account of our activities since the emergence of this group, because we know and we are convinced, it’s your project.

“We have seen you in the media advocating for the CPC to produce the next chairman of the party, which is an ideal thing to do,” the DG stated.

Alancha said the group is committed and working towards the emergence of Senator Al-makura as the next national chairman of the party.

According to him, Sen. Al-makura remains the best candidate for the job from the North Central zone, because he possessed the required capacity, competence, even as an astute administrator whose experience and achievements, as a former governor, has positioned him as the best candidate to occupy the seat of the national chairman of the ruling party.

Alancha explained that the project of the national chairman, is a leader circle election, which demands much and wider consultations among critical stakeholders and party leaders, to key into this project, in order for the group to succeed in its quest to make Al-makura the next chairman of the APC.

To this end, the DG said the group has engaged in advocacy, demanding that the position of the national chairman be zoned to the north central, basing its argument on the fact that, the north central, since the formation of the APC in June 2013 and the general elections in 2015 and 2019 respectively, have flipped 100 percent APC, except for Benue State.

“I am glad to inform you that we have the support of the majority of leaders and stakeholders that we have been meeting with on the zoning arrangement.

“Because the north central is full with men with capacity to build the party, reposition it and reform it beyond 2023,” Alancha said.

He, however, solicited for the governor’s support and partnership, particularly in the area of funding the group’s roadmap of activities, which includes logistics, media and publicity, mobility for advocacy and consultation with relevant stakeholders across the country.

This was even as Alancha disclosed that Senator Al-makura has already donated a befitting, well equipped office in Abuja, to serve as the operational headquarters of the group.

“The success of this project is key to your support, your guidance and advice,” he concluded.

Responding, Governor Sule restated his call for fairness in zoning the position of the national chairman of the ruling APC, stressing that he is willing to assist the group achieve its objectives.

Referring to the alliance that led to the formation of the APC in 2013, Engineer Sule said when the merger took place, the strongest member of the alliance, the CPC, led by President Muhammadu Buhari, has the least number of states to offer.

The governor pointed out that while the two major actors in the alliance, namely the Action Congress of Nigeria (ACN) and the All Nigeria Peoples Party (ANPP), have all taken their chance to occupy the position of the national chairman of the APC, the only remaining member that is yet to be opportune to hold that position, is the CPC.

Governor Sule used the opportunity of the visit to throw his weight behind the agitation for rotational presidency, adding that he will be unfair to himself, if after benefiting from rotation of power, he comes out to denounce the system that brought him to power.

“That is the reason why, from all indications, I have never said anything against the agitation for the rotation of the presidency to go to the south, because I don’t think it’s a bad idea for peace to remain in Nigeria if there is rotational presidency,” he said.

The governor added that based on that kind of fairness and distribution, if the presidency will be zoned to the south, then the national chairmanship should be zoned to the north.

“The North West currently has a President that has at least two years to go, so it will not be ideal to have a president and a chairman, even for one year, talk less of two years, from the same zone.

“The Northeast has the Senate President currently and it will not be ideal again to have the chairman from that zone. The only zone that is ideal to occupy that position is the North central,” he stated.

Governor Sule, however, cautioned the group to go about its activities with tact and not to be confrontational in its advocacy.

“I urge you to follow at least, all the governors of the North central. Let the zone seeks to occupy the position of the national chairman first,” the governor said.