Nigeria has never been as divided’ is now a common statement you hear from many people in different places. And you wonder how we got here, which is yet another common statement used to amplify the divisiveness that now exists among Nigerians of different tribes and religion.

If the level of acrimony, deep rooted divisive bitterness and ethnicity that trailed the 2015 presidential election was said to be alarming, what followed in the 2019 election is beyond any stretch of imagination. Obviously, the fabric that once held Nigeria together is right now in tatters and in dire need of urgent repairs.

The level of intolerance based either on religious or tribal inclination, all of which now define political leanings of most Nigerians is assuming a very dangerous dimension. It is so bad that in Nigeria today, one can suddenly wake up to trending stories of one ethnic group threatening to deport the other from their places of residence within their own country. Or something else as crazy!

And we do not need any seer to tell that this is a clear danger to the growth of our democracy, which is about 20 years old since transition from military to civilian rule in 1999.

The political tension that is brewing in the country, particularly since the build up to 2015 general elections in which the All Progressive Congress (APC) candidate defeated the incumbent and Peoples Democratic Party (PDP) candidate, if not checked, may reach boiling point sooner than later.

Which is why the statement, manner of communication and indeed the grandstanding by the APC national chairman, Comrade Adams Oshiomhole, on who become leaders of the 9th Assembly, is as troubling and infamous as the 97:5% response by President Muhammadu Buhari to a question on the need for inclusive government after he was declared winner of the 2015 elections.

Much as the presidential response, made on an international stage, was widely condemned by well meaning Nigerians and other citizens of the world, 97:5% formula, nevertheless, appeared to be the official policy of the Buhari administration these past four years.

This level of intolerance and divisiveness, it would appear, has majorly been responsible for even some highly educated and enlightened Nigerians justifying, with every energy in them, certain acts of bad governance and injustice clearly meted out on a section of the country by government, so long they benefitted from the unjust act, without giving a thought to the danger such tendencies portend to the entire system in the long run.

Is it, therefore, surprising today that Nigeria plays politics of bitterness, resulting in so much bloodshed and tragedies across the land? Little wonder also that the 2019 elections recorded the highest number of deaths in the history of any elections in Nigeria. A simple exercise was unfortunately turned into warfare, with the Niger Delta region bearing the brunt of it all.

Now that the blood-soaked elections are over, one would have expected some sober reflections on the part of our leaders. But no, the evil spirit of winner-takes-it-all residing in some of them will not let them think of ways to unify and heal the nation of deep wounds they inflicted on it during the exercise.

Going by recent statements of the APC national chairman, Comrade Adams Oshiomhole, the impression is that there is no end to this ‘war’.

But what Nigeria needs right now is good governance.  How does the APC-led government, for instance, intend to improve on power supply? What about roads, water supply, hospitals, education, the tourism sector, transport, agriculture?

Generally, what ought to preoccupy the thoughts and actions of the ruling party is how its government would make life bearable for the long suffering common man. And this in no way, has any relationship with the raging argument on how to share the ‘spoils of war’, so to speak, that forms the major interest of these politicians right now, if we know them well enough.

Oshiomhole had during a stakeholders meeting with newly elected and re-elected members of the House of Representatives, last week, insisted that the governing party with majority of senators and members-elect in the 9th Assembly, would not allow opposition members chairmanship of any committee in the National Assembly.

According to him, with about 65 Senators-elect and 223 House of Representatives members-elect out of the 360, APC  is in the position to make and take decisions without necessarily seeking the support of the opposition at the National Assembly.

His words: “We are far ahead of the main opposition in the parliament – 223 out of 360. We have all the numbers required to make all the laws in the National Assembly. 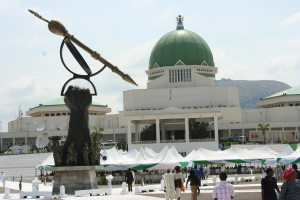 “Only one out of 16 APC senators that decamped won election. It is the way God wants to punish them for us,” Oshiomhole said among other things.

Although there is nothing wrong with a political party strategizing on way forward, the tone of the APC chairman would however suggest his party is still on campaign mode, whereas elections ended some weeks back.

If truly politics is a game of numbers, there is really no need for a ruling party leader to deploy such inflammatory statements in a bid to grab what should ordinarily be in the party’s kitty and used with all sense of responsibility.

A winning team at this time is expected to utilize every available avenue to unify all stakeholders for the smooth running of government, irrespective of political leanings.

Oshiomhole’s showboat, which runs contrary to President Buhari’s earlier pledge to run an inclusive government, is akin to repeating his party’s past mistake that led to it losing to the opposition party, leadership of the 8th Assembly.

I have heard many people say they don’t really care about what happens to and in APC, but we must not forget that whatever happens in the ruling party eventually affects the stability or lack of it in the polity.

Expectedly, this abrasive posturing is already being resisted by some influential legislators. Dissents are rising from both within and outside the party.

For instance, Senator Mohammed Ndume of the APC, who has publicly expressed interest for the office of Senate President, has lashed out at his party chairman, warning that the scenario that sparked crises between the 8th Assembly and the Muhammadu Buhari presidency was again being repeated.

Reacting to the endorsement of Ahmad Lawan and Femi Gbajabiamila as Senate President and Speaker of the House of Representatives, respectively by the APC, Ndume described the endorsement as unconstitutional, shocking and unfortunate.

He said the party which ought to be democratic, was surprisingly toeing the path of the PDP which it hitherto accused of impunity. Noting that Oshiomhole was causing the party to repeat the 2015 mistake that sparked the crisis between the executive and legislative branches, Ndume maintained that Section 50(1A) of the Constitution put the duty of electing presiding officers of the National Assembly on its members.

He said that by the provisions of the constitution, “neither Oshiomhole nor President Buhari or even any party leader, has the right to force on elected senators or members of the House of Representatives, their presiding officers.

PDP while taking a swipe at Oshiomhole and what is now said to be the position of the APC, said it as laughable and amounts to empty grandstanding and self-delusion for APC leadership to posture as if the presiding offices and committees’ chairmanships in the National Assembly are exclusive rights of the APC.

In a statement by its National Publicity Secretary, Kola Ologbondiyan, the opposition party reminded that the National Assembly belongs to no political party but to all Nigerians, who exercise their control through their elected representatives. The party quoted relevant sections of the constitution to support its claim.

To this regard, the PDP argues that it does not only have a constitutional say in the process of the emergence of the leadership of the 9th National Assembly but will, as a matter of constitutional right, field candidates into presiding offices of both chambers, if need be.

In all of this, Oshiomhole should know that the last thing his party needs in the 9th Senate is the kind of confusion he allegedly imported into the party primaries. Otherwise, what happened in 2015 will happen again in 2019 because he is dealing with more politically mature individuals, this time that represent diverse political interests and tendencies.

…Of side-chic and justification of savagery

Shortly after the video of a school girl identified as Success went viral, were she was heard saying she would rather be flogged for non-payment of school levy than be sent away from school because dem go flog (her) tire, another video, this time with real flogging carried out on a grown woman and actually a mother, surfaced online.

While Nwankwo was doing the flogging, it is alleged that her friend and wife to the man caught cheating, Azotani Toochukwu, was doing the recording with a group of others, mostly men, including the husband, watching and half –heartedly telling her it was enough.

One interesting thing to the story is that Mr. Ifeanyi Azota could not even come to the rescue of his side-chic from the women molesting her.

After some running around, flogging and weeping within the compound, they chased her out of the house and into the open as they needed some public display to pep up their action.

Now, my issue is with the caliber of ladies supporting the barbaric act, for whatever it is. None of them have mentioned what they think of or will do to such philandering husband that invited the mistress to their home, possibly under the pretense that he was single.

My point? With such shameless husband, you are only compounding your problem when you decide to share your shame to the public by beating up the mistress. Just face your man, squarely. You may even consider getting friendly with the mistress, even if to get more information about the man you may have been risking your life with as husband that you really do not know.

You can also divorce him, if you can’t live with the reality. Yes, divorce him because a man that will so humiliate you as a wife, has no feelings for you.

Ok, so after making public display following the whole disgusting show, how do you go back to getting romantic with your husband? You left the misery you are living to take your frustration out on someone else that may have fallen prey to your husband’s philandering!

Since it takes two to tango, as the saying goes, and none alleging to be raped, what you need to do in this instance is to respect yourself by leaving the mistress alone. Just tell yourself that your husband, who invited her to your home, is irresponsible. He is your problem, not her.

The moment you act like the two women above, with the husband foolishly hanging around while the whipping was going on and doing nothing about it, you are taking the law into your hands and will be charged for assault. And possibly be sent to jail. At the end wetin you come gain? Nothing!

Already, police in Anambra State has arrested the two women and the so-called husband for making nude videos of the victim and blackmailing her with a demand of N60, 000 to stop them from uploading the video on the internet.