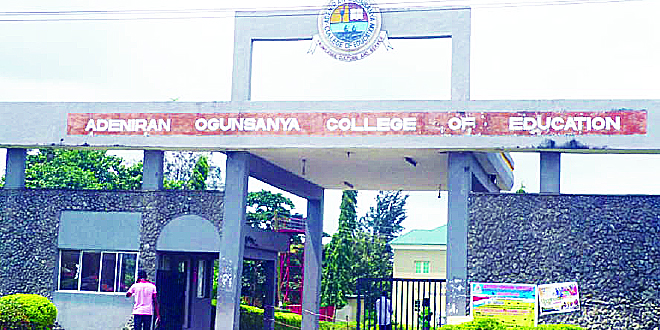 Academic activities on Friday began at the Adeniran Ogunsanya College of Education (AOCOED), Ijanikin, Lagos, following the suspension of indefinite strike by the college lecturers.

The News Agency of Nigeria (NAN) reports that the college chapter of the Colleges of Education Academic Staff Union (COEASU), had on Thursday announced suspension of the strike it embarked upon on August 30.

Some of the union’s demands include: immediate commencement of payment of 53.3 per cent allowances and arrears, resuscitation of internally generated revenue programme.

READ ALSO:Lagos-Ibadan expressway: We are on 24-hour standby – FRSC

Others are: payment of all outstanding honoraria, promotion criteria, establishment of college and school based bookshop, release of N22.8 million TETFUND money to the beneficiaries.

Commenting, Mr Ige Ajayi, the union Chairman, told NAN that the strike was suspended due to intervention of the state Deputy Governor, Mr Hamzat Obafemi.

“He gave us assurances and commitment that the concern authority will soon respond to our demands.

“We also look at the speed which they responded to our demands.

“The union decided to suspend the strike with the window of a month.

“If they did not resolve the issues within a month, the congress will decide the next step.

“For all our decisions in the union, congress decides, not the executive members,” he said.(NAN)