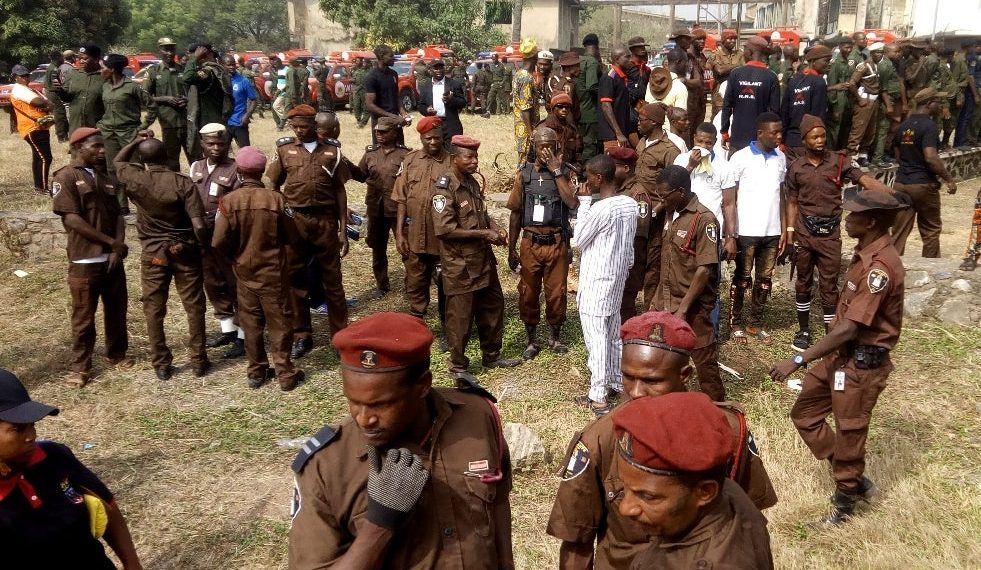 Some youths drawn from the six states in the southwest region on Tuesday protested in Ado Ekiti, Ekiti State capital against the formation of the Western Nigerian Security Network codenamed OPERATION AMOTEKUN.

The group under the banner of ‘Yoruba Appraisal Forum’  that spearheaded the protest, wanted the body scrapped across the six states of Ekiti, Oyo, Osun, Lagos, Ondo and Ogun States to avoid future calamity.

The group said they had uncovered alleged plot to use Amotekun to  destabilize the southwest and ultimately the entire country, in 2023.

They demanded that the entire Yoruba race would be endangered in 2023 with the existence of Amotekun, predicting that the network will be hijacked by politicians for insidious mission in the coming elections.

Some of the placards they flaunted read: ‘Amotekun Will Turn our Youths to Militia Group”, ‘Amotekun Motive, Shine Your Eyes’, ‘Amotekun Can Bring Proliferation of Arms’, among others.

Addressing journalists at Ajilosun area where the protest was held, the group’s coordinator, Mr. Adeshina Animasaun, said the project of Amotekun was a laudable one, but insisted that it has been hijacked by those nursing ambition in 2023.

Animasaun appealed to President Muhammadu Buhari to rejig the country’s security architecture to prevent resurgence of what he called ‘militia groups’ with tendencies to pose dangers to the lives of the people.

“We call on President Buhari to use his good office to call the southwest governors to order by prevailing on them not to sign the Amotekun bills into laws yet, until proper checks about such security are done”, he said.

The group faulted the hurried manners at which the governors conducted the public hearings leading to formation of Amotekun, saying : “it ought to have been done senatorially, rather than bringing few  people to the state capitals to contribute in a programme that lasted for 30 minutes”.

He added: “The southwest governors should be dissuaded from innocently equipping and funding a security outfit that some unscrupulous and wicked individuals have planned to use against the same people the governors have sworn to protect.

“The governors should be made to realise that they should not allow themselves to be railroaded into taking an action they will regret later.

The group urged the handlers to take note of the warnings issued by Attorney General and Minister of Justice, Abubakar Malami, former Kaduna State Government, Balarabe Musa and the Miyetti Allah Kautal Hore and others about the hazards inherent in Amotekun.

CBN rolls out measures to check effect of coronavirus on economy