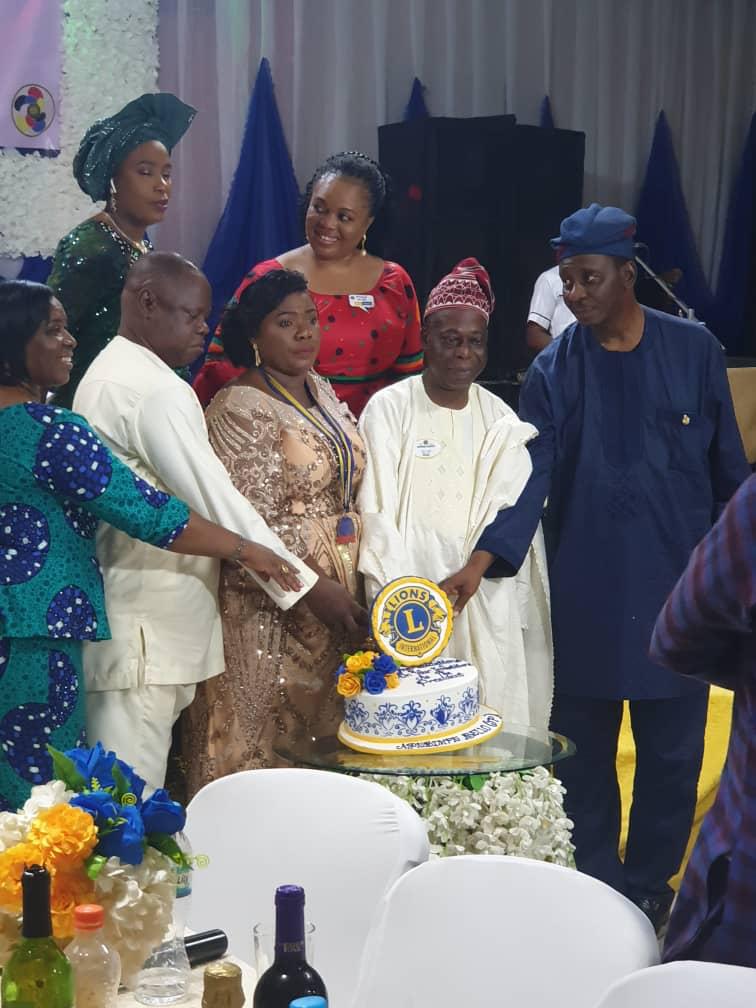 By Chibuzo Ihegboro
The Investiture Ceremony of Emerald Lions Club on Sunday, November 24, 2019, drew a large turnout of club members, families, friends and well-wishers to the Lagos Country Club, Ikeja GRA, to witness the public presentation of Adebimpe Emilola Bello, as the second president of the club. The event, chaired by the Apapa Local Government chairman, had in attendance many dignitaries, including the District Governor of Lions Club, District 404A1, Adekunle Adedipe, the governor in charge of five states, namely Ogun, Ondo, Edo, Delta and parts of Lagos.

During her acceptance speech, Bello disclosed that the club would sponsor 50 cataract surgeries and also donates 150 bedsheets to three public hospitals.

READ ALSO:http://Adeyemi defeats Melaye, wins Kogi West senatorial district election
According to her, the club will continue to pursue its vision of fighting preventable blindness, feeding the hungry, protecting the environment, increase pediatric cancer enlightenment and creating diabetes awareness amongst others.
Bello pledged the club’s commitment to meeting the growing needs of the community and serving the interest of the underprivileged in the society.
While appreciating donors, she promised to give an account of her stewardship at the end of her tenure as president.

Speaking at the event, Dr Abiola Oyeleye, a consultant ophthalmologist, appealed to Nigerians to imbibe the culture of donating their corneas for harvesting after death to help the blind regain sight.

Oyeleye, Medical Director, Eye Doctor’s, made the plea in his keynote address.
The consultant ophthalmologist said that cornea donation was necessary for the preservation and restoration of sight to people with corneal blindness. One cornea donor can restore sight to two people, he stated.

Corneal blindness, according to the World Health Organisation (WHO), is the fourth most common cause of blindness globally, accounting for over five per cent of the total blind population.
A cornea transplant, often referred to as Keratoplasty or corneal graft, is an operation to remove all or part of a damaged cornea and replace it with healthy donor tissue.
Oyeleye disclosed that the Lagos Eye Bank had only obtained two corneal grafts locally in over 20 years with the donation coming from Lions Club members. Other grafts used were obtained from Asia and the United States of America.

One of the hindrances to corneal donation in Nigeria, according to him, stems from the myths of reincarnation. Many people, he said, would say that they need their eyes to see when they come back to the world.
He noted that the Anthony Village Emerald Lions Club had embarked on several interventions in eye care including provision of glasses, cataract surgery, diabetes screening, provision of white canes and guide dogs for the blind and eye test equipment.

The guest speaker of the occasion, Lynda Okpeseyi, Second Vice District Governor of District 404A2, reiterated the need for organ donation and encouraged sponsorship of cornea grafts.