Since last Wednesday, I had resolved that I would dedicate this week’s article to begging President Muhammadu Buhari to relocate to Lagos and work from here. And that if he would not, he should work out an arrangement to enable him visit more often – probably, once every week.

I made the resolve because it has since become clear to us in Lagos that the problem of articulated trucks, turning every available road on the Lagos Mainland into a parking lot is not an intractable one, as we were erroneously made to believe.

It is also not because Dangote is undertaking any constructions at the seaports. Because, every time the president is coming to Lagos, the tankers and trailers suddenly disappear from the roads. And it’s not as if they relocate to the inner roads o! They just vanish. Even the ones that block the entrance to my downtown estate, which road leads to nowhere in particular, also disappear. So, for the first time in recent memory, I made the journey from Amuwo (FESTAC axis) to my Ikeja office in 20 minutes. It is normally a two – three hour journey whenever the president is not coming to town.

So, Mr. President, we beg you to come more often. Even if it is to commission bus-stop, Keke Marwa, a new mansion for MC Oluomo, naming ceremony of the new baby of the state chairman of the APC, the reinstatement of the General Manager of LAWMA, the flag off of the patching of potholes, the relocation of Governor Aregbesola to Lagos or just anything. We just want you around more often – and pray that the indignant disrespect that comes with familiarity does not creep in, so much so that your visit would lose its power over our lords of Lagos roads; trailers, tankers and their Danfo and Okada kindred spirits.

But, like I noted earlier, something else took my attention from the magic of PMB’s visit on Lagos roads. That thing was none other than Buhari’s Labour Minister and former governor of Anambra State, Dr. Chris Ngige. 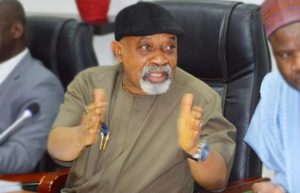 In fact, I thought a social media friend of mine was being too mean when he penned the following response to Ngige’s comments about Nigeria having surplus doctors: “Abeg, na whose brother be this minister again? Or better still, who knows his psychiatrists? For, clearly, he has skipped his medication again.”

I was still undecided whether to classify the comment, as Fake News or Hate Speech, when another friend followed with an even more mischievous comment. According to him, “he (Ngige) is the evidence that we really don’t have enough doctors, or else, he should be seeing one.”

Between these two extreme views were others that simply dismissed the minister as a misfit, babalawo, witchdoctor, political apologist, etc. This is even as I watch in amazement, as the minister struggles to make a bad case even worse, by insisting that all 180 million of us were too unintelligent to understand what he really said.  Another evidence that only those in government (and in the ruling party) understand anything about anything. The rest of us are downright stupid and unteachable.

Yes, Labour Minister Chris Ngige has been trending for all the wrong reasons. The minister is on record to have said that he is unworried by the exodus of medical doctors from the country. He said he is unworried because the country has surplus doctors.

Of course, it was just an attempt to continue to live in denial, even on the eve of the World Malaria Day. He thought he would be projecting the Buhari government in bad light if he owned up that government had failed in providing the conducive environment doctors need to do their work and that many of the doctors had become economic refugees in other countries, even when we need them more in Nigeria.

Pushed further, the minister also explained how it was necessary we exported our excess capacity to earn foreign exchange, as the Ceylonese used to do. Please, who still remembers that Sri Lanka used to be called Ceylon? That change of name happened as far back as 1972. And some people still have the effrontery  to poke jokes at President Buhari for talking about Western Germany, which is even an even more recent development than Ceylon. In other words, Ngige’s ideas are even more archaic than Buhari’s. No wonder, he feels they deserve a Nobel prize for upping minimum wage to N30,000 – the equivalent of one bag of rice and 20 litres of kerosene.

It was only when Ngige noticed that his Channels TV interviewers already had his neck right in the noose that he began to rabble about going abroad to acquire additional knowledge, and coming back to invest in the country.

Now, it’s that after-thought part of the chat that the minister wants us to accept, as the beef of the discussion. No sir! The first one, as we used to say in my village, has already been taken by Chi.

I watched several replays of what Ngige said on Channels. He said it in English, and I always thought I understood the language – at least, until the minister began to claim that he was misquoted.

I went back to listen to the clip again. I did not see anyone quoting Ngige. He spoke for himself. There was no quoting, let alone, misquoting. He said it, and took even more time to explain and reinforce his position.

I can forgive him if he claims he was talking as a ‘politician’ and party propagandist, and not necessarily as a medical doctor, who also doubles as Labour minister.

I can forgive him if he says he did not know the import of what he was saying. That his reasoning took flight at the sight of TV cameras. That his mouth ran faster than his brain and he, therefore, spoke before he could think. Or that he was trying to make the government look good, douse tension and de-escalate rising concerns over the looming collapse of our healthcare system. Or even that the government encourages Nigerian doctors to flee abroad so that President Buhari can have Nigerian doctors attend to him whenever he goes for treatment abroad. But to say he was misquoted? That’s a little disingenuous!

However, my faith in Nigeria is renewed by the fact that several other Nigerians who have the title ‘Dr.’ attached to their names are real medical doctors – not native doctors, not voodoo doctors. Just genuine medicos, who paid attention to their lesson notes and followed trends in their professions, not busying themselves with carrying bags and butt-licking for semi-illiterate political godfathers. It is these other people, who have now helped to set the record straight. That, unlike what Ngige wanted to hoodwink us into believing, that Nigeria is in dire need of doctors.

That it is a supreme irony that a country, which has less than it needs to survive is exporting to a United Kingdom, for instance, which has already passed the survival threshold and is nudging close to three doctors per 1,000.

One is, however, consoled by the fact that our dear political-doctor minister has since realised he goofed, and has been busy telling us what he should have said – even though he is still trying to hide behind one finger, by insisting he was misquoted. What would they not blame on journalists!

Moro’s tortuous journey to the Senate