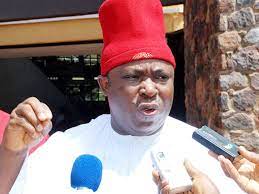 Anambra people cannot be cheated the way the people of Imo State were ‘cheated’, says a former National Chairman of the All Progressives Grand Alliance (APGA), Chief Victor Umeh.

Chief Umeh was replying to the reaction of the defeated candidate of the All Progressives Congress (APC) in the just-concluded 2021 Anambra governorship election, Sen. Andy Uba, who had claimed that he (Uba) would fight to the Supreme Court in order to claim what he said was his victory at the polls.

Chief Umeh told the senator to bury his thought of going to court to challenge the outcome of the election.

Chief Umeh made the comments, last Sunday, while speaking with journalists, in Anambra State.

The APGA chieftain also said the people of Anambra State had openly chosen the leader they want based on the outcome of the November 6 election which produced Prof. Charles Chukwuma Soludo of APGA.

Chief Umeh further berated Sen. Uba over the latter’s threat to challenge the election result in court by telling the APC candidate that ‘Anambra is not Imo’ where a candidate who came fourth at the polls eventually became the state governor through a court order.

In the words of chief Umeh, “The election took place in all the 21 local government areas in the state and he didn’t win any council area, so what is he going to court for,” he said.

“The outcome of the election was a true reflection of what Anambra people want. The Anambra people didn’t give Andy Uba any mandate. They wanted Soludo, and they voted for him massively.

“We are used to such cases. I have been in Politics for more than 20-years now, so APGA is not afraid of going to Court with Andy Uba.

“Nigeria Judiciary is not an undertaker. Please tell him, we are waiting for him in the Court. Anambra is not Imo State, where a fourth candidate in election suddenly became a governor,” Chief Umeh said.