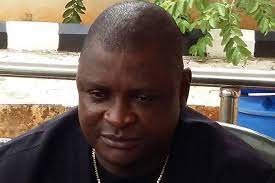 The All Progressives Congress (APC) is still counting its losses following the dismal outing in the recently held gubernatorial election in Anambra State.

This time, the member representing Ekwusigo Constituency in the Anambra State House of Assembly, Hon. Onyebuchi Offor, has dumped the party and returned to the Peoples Democratic Party (PDP).

Hon. Offor had defected to the APC on October 6 in the hope that APC and its candidate, Andy Uba, would emerge victorious.

That was not to be at the end of the day, as Prof. Charles Soludo of the All Progressives Grand Alliance (APGA) trounced other contestants and was declared winner.

However, during house plenary in Awka, Offor, who was the House Minority Leader,  announced his return to the PDP after consulting with his constituents.

“Two months ago I announced my defection from PDP to APC on the floor of this house. I have tested the waters and realised that my former party PDP is better,” he said in the letter submitted to the House.

“So, I want to humbly inform this house that I am going back to my party PDP.”

Offor’s return, may well be the first of several others that many fear will soon hit the APC in the state.

Ooni delegation presents ‘Treasures of Our Ancestors’ to black leaders at…