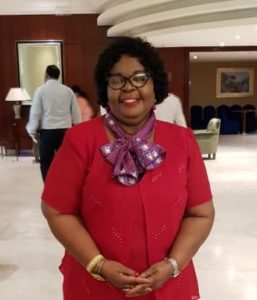 The Nigeria Institute of Management (NIM) (Chartered) on Thursday said that Mrs Pat Anabor had emerged the 22nd President and Chiarman, Governing Council of the institute.

A statement signed by Mr Tony Fadaka,Registrar/Chief Executive of the Institute, said that the emergence of Anabor followed an election of new principal officers to run the affairs of the institute for the next two years.

He said that Anabor, an accomplished and renowned librarian, was the Deputy President of the institute until her election.

The Registrar said that Engr. Ibrahim Inuwa, a former President of the Nigerian Society of Engineers (NSE) and the Council for the Regulation of Engineering in Nigeria (COREN), was also elected as Deputy President.

According to him, Dr Christiana Atako, a former acting ManagingDirector/Chief Executive Officer of the Niger Delta Development Commission (NDDC) emerged as the National Treasurer.

The News Agency of Nigeria (NAN) reports that the new president, a Fellow of the Institute since 2002 and its one-time National Treasurer, is an alumnus of California State University, San Jose, California, United States of America.

Prior to moving her services to NIM as the Institute’s librarian, Anabor had worked with the University of Benin where she was Assistant Librarian in 1974 and rose to become Senior Librarian in 1981.

She held the position till 1985 when she joined the Institute.

Through hard work and dedication she climbed swiftly to the management ladder and moved from being the Institute’s Librarian at the point of entry to becoming the Chief Executive 18 years later.

Anabor was the recipient of 1997 NIM Presidential Award in recognition of outstanding contributions to the development of the Institute.

She is also the first retired Registrar/Chief Executive to be elected into the Council of the Institute.

Before joining the Council in 2011, she had served as Secretary to Council during her tenure as the Registrar/Chief Executive between 2003 to 2008 .

Meanwhile, the investiture of the new President and the other newly elected executives of the institute will take place on December 12. (NAN)

I will protect Nigerians home and abroad – Buhari