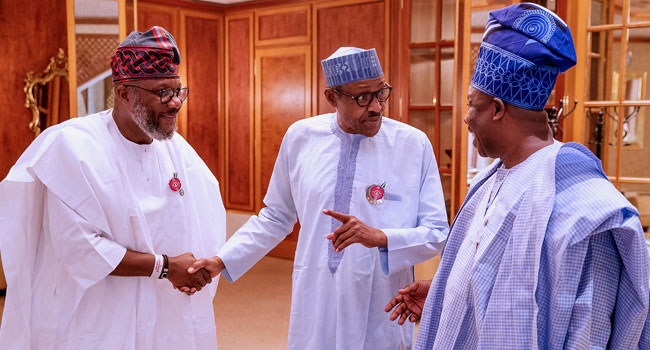 Governor Ibikunle Amosun of Ogun State, on Sunday, led the governorship candidate of Allied Peoples Movement (APM) in the state, Adekunle Akinlade, to visitd President Muhammadu Buhari at the State House, in Abuja

Governor Amosun had earlier declared his support for the APM candidate, who was initially an aspirant on the platform of the All Progressives Congress (APC).

The party primaries produced Dapo Abiodun as the APC governorship candidate but Akinlade described it as “the falsification of the people’s will,” and moved to APM.

APM has since commenced ward to ward campaigns in Ogun State and adopted President Muhammadu Buhari as their presidential candidate.

A former governor of the state, Olusegun Osoba had, earlier in December 2018, led the APC governorship candidate, Dapo Abiodun to President Buhari at the villa, in Abuja.