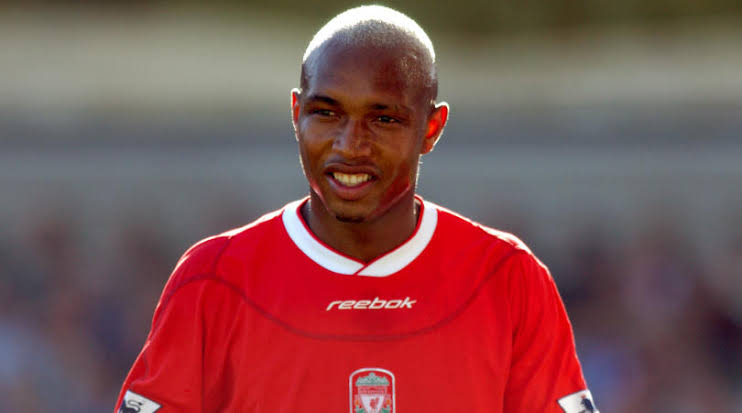 The Senegalese superstar who was largely responsible for his country’s first ever quarter final finish at the 2002 World Cup jointly hosted by Korea/Japan, is to fly into Lagos from France later today.

Though retired from football since 2015, El Hadji Diouf still have his eyes on the game, working as a Government Goodwill Ambassador and Adviser on Sport to President Macky Sall.

He is also running his own sports newspaper business in Dakar and operating his own gymnasium.

Diouf was signed in 2002 for £10m by Gérard Houllier ahead of the 2002 World Cup. His impressive performances in the tournament for Senegal, led to much excitement for his arrival at Anfield.

Apart from the spat incident at Liverpool, Diouf distinguished himself in the Premier League before moving on to Bolton Wanderers and other clubs elsewhere.

Coordinator of The Match, Waidi Akanni could not hide his feelings yesterday with the arrival of former Bolton Wanderers’ midfielder, Khalilou Fadiga.

“As you can see, the excitement is building as the former African stars have started to trickle into Lagos to honour Governor Akinwunmi Ambode for his laudable strides in sports developments in the state,” gushed the ex international.

He also listed those coming into Lagos today to include another Senegalese midfielder, Diomansy Kamara who played three Africa Cup of Nations for the Teranga Lions.

He was a regular for Fulham before other stints with Leicester City and West Brom. He retired from the game on June 1, 2016.

Former Black Stars of Ghana Captain, Stephen Appiah is also on the card to arrive this evening. Appiah represented Ghana at the youth, Olympic, and senior levels. He captained the Black Stars at their World Cup debut in 2006 and was a member of their squad for the 2010 World Cup.

Didier Zokora is also confirmed on the flight into Lagos this afternoon for The Match. He’s an Ivorian former professional footballer who played as a defensive midfielder for both club and country. He represented the Ivory Coast national team for 14 years, beginning in 2000, and is currently the nation’s most capped player.

Others former African stars expected to arrive this evening include; Herita Illunga, a retired Congolese footballer who played as a left-back. At club level, he represented Espanyol B, Saint-Étienne, Toulouse, West Ham United, Doncaster Rovers, Rennes, Carquefou, and US Creteil.

Two Ivorians, Tienne Siaka who last played for Montpellier and Kader Kaita complete the lists of those coming into town today.

Former World Footballer of the Year and President of Liberia, George Weah is listed amongst other retired top African soccer legends like Essien, Samuel Eto’O Fills, Abubarkar Titi Camara, and Yaya Toure, Richard Kingston, Christian Karembeu (former Real Madrid and France World Cup winner), Aaron Mokoena and Mamodu Sissoko who will be in Lagos on Friday for The Match.