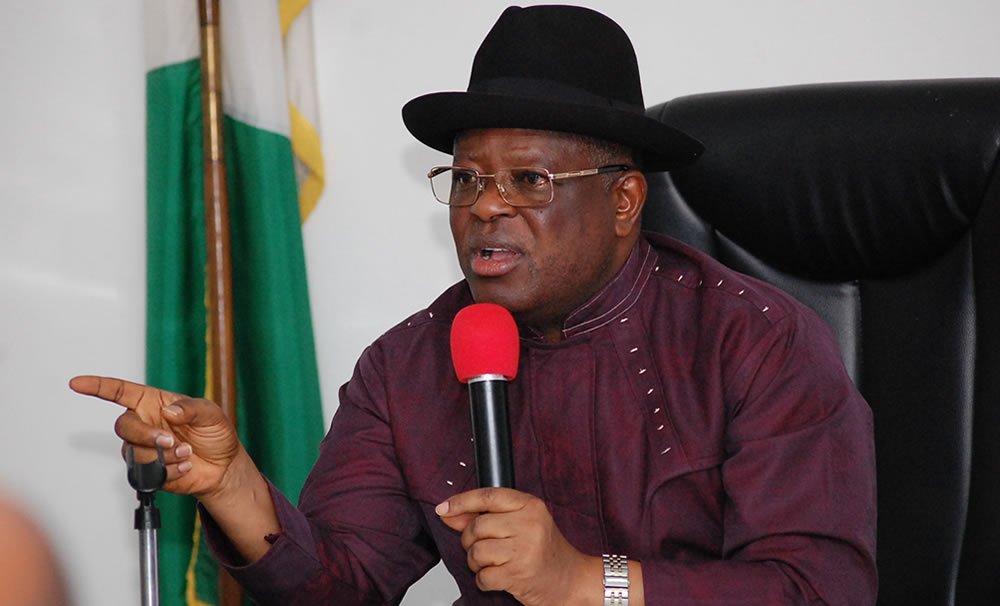 Share
Clement Nnachi, Abakaliki
The Chairman of South_East Governor’s Forum and Governor of Ebonyi State, Engr. David Umahi,  has reiterated that the closure of the Akanu Ibiam Airport Enugu to effect repairs was for the safety of the people of the geo-political zone.
Apparently referring to insinuations in some quarters alluding that the shutdown of the airport  on 24th August  2019 was punitive, Umahi dismissed such insinuations assuring that the repairs of the runways and installations of other equipments would ensure that the airport meets International Best Practices.
Governor Umahi made the assertion at the Abakaliki Township Stadium, on Tuesday, on the occasion marking the 59th Celebration of the Nation and 23rd Anniversary of the creation of the State.
“Let me assure the entire south_east people that the closure of the Akanu Ibiam Airport is for the safety of our people
“As Chairman of the South-East Governor’s Forum , I have done a  meeting with Mr President One_On _One , we have agreed on the modality on the execution and comprehensive overhaul of that airport”
Governor Umahi said that the Government was seeking for a Special Funding of the project stating ” as I travel with Mr President tomorrow , I will review with him how far we have gone with the release of the funds for the quick completion of the project”
He commended the Federal Government for the fight against corruption in addition to its avowed commitment on the construction of the 2nd Niger Bridge.
The governor decried the inhuman treatment meted out to Nigerian citizens abroad describing it as embarrassing .
“The way we are treated outside Nigeria is not encouraging. in Ghana some Nigerians are sentenced to 50 to 100 years imprisonment , even as a Governor you are being looked down upon”
“When I was in the United States of America. they singled us out for screening , this is humiliation “
Related Posts

Governor Umahi disclosed that he would be travelling with President Buhari to South Africa to address the problems and challenges confronting Nigerian citizens resident in that country.
Addressing the citizens of the  State. he cautioned that his administration would sanction appointee of government that castigate leaders of the country.
“Casting openly our leaders would not add value to our government, rather we should focus on improving the condition of our people. we must enhance our cultural values”
The governor revealed that a total of 4,300 widows in the state have been empowered with  N100,000 each to embark on various trades of their choice.
“We celebrate and show love to widows. we have 4,300 widows identified in the state, out of this figure 4,000 have been empowered with N100,000 each, the other 300 are on N20,000 monthly stipend”
He promised to offer more political appointments and positions to women as the Administration progresses .
Governor Umahi said that the government would focus on Beautification of the capital city Abakaliki to make it rank first among major towns in the country.
“Abakaliki Capital city must rank first as one of the most beautiful cities in the country. what we are doing is to re- write the insult we have suffered over the year.
He said that his administration was committed in creating men and women millionaires, who in time to come would create wealth and become employers of labour.