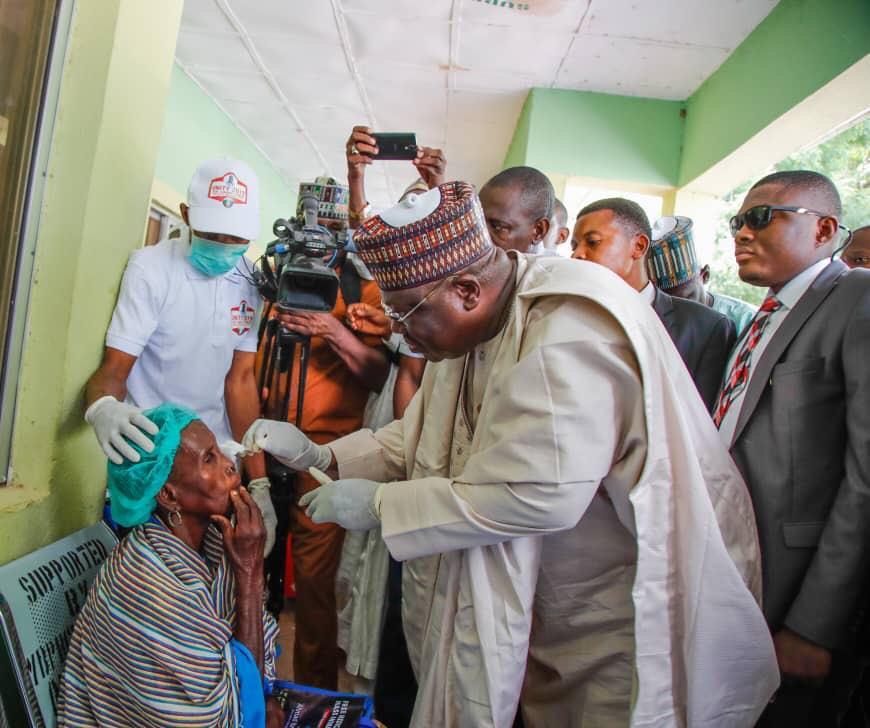 Yobe North Senatorial district witnessed a breath of fresh air last week with the unveiling of the Free Medical Outreach and Mass Animal Vaccination by the President of the Senate, Ahmad Ibrahim Lawan.

Lawan took time off his busy schedule of his office to launch what will remain indelible in the hearts of his constituents. The Free Medical Outreach and Mass Animal Vaccination is sponsored by the Senate President to provide medical treatments and services to his constituents to enable them enjoy good health.

While the mass animal vaccination will commence this month and is expected to take care of one million animals of various types, the free medical outreach has taken off with attention given to persons with medical needs requiring eye services, surgical services, gynecological checking and surgeries for hyena, fibroid and many others. About 800 people have been screened and are to receive the free medical treatments and services.

This is not the first time the Senate President has given out free medical and veterinary services to his people. A similar exercise was conducted last year where over five hundred thousand animals were vaccinated and hundreds of people given free medical services.

The exercise was planned to be a one-off programme, with the belief that all those with such medical challenges would be taken care of. However, it turned out that more persons that required medical attention could not be attended to, therefore necessitating another outreach with a promise that the free medical services will continue to be rendered to the people who require such services.

At the launch of the current medical outreach, plans were made to provide free eye, gynecological and surgical services for only 400 persons, but those who were confirmed to be in need of the treatment after screening were nearly 800, half of whom were asked to come back next year when another free medical outreach would probably take place again.

Understanding the implication of this development, Dr. Lawan, in his magnanimity, graciously directed that the nearly 800 persons who have been screened and found to be in need of one medical care or the other be attended to. This goes a long way to show that Lawan was willing to go out of his way to do anything humanly possible to put smiles on the faces of his people.

The free medical services and the attendant costs notwithstanding, Distinguished Senator Ahmad Lawan is not done with his people. As an academic and well read politician, he understands and appreciates the importance of education and the role it plays in individual and national development.

He has stated clearly that he does not support the idea of people looking for employment after secondary school education when they can still further their education just as he did to become a Phd. degree holder.

To correct this anomaly, the Senate President offered to purchase UTME direct entry forms for 1000 qualified applicants and also offered to pay the tuition fees for successful candidates. All for his constituents in Yobe North senatorial district.

To underscore his desires for easy access for his people to sit for the UTME, Lawan pledged to provide computers for the Atiku Abubakar College in Nguru so as to make the place a computer based centre for the exams. The promise is currently being implemented to ensure that the place is ready for use as a JAMB centre.

The gesture being extended to the people of Yobe North Senatorial District by Dr. Ahmad Lawan is not surprising. Since his election as a legislator, first in the House of Representatives and now in the Senate, he has embarked on numerous uplifting and lifesaving programmes and projects in his constituency, a move that has consistently earned him victory since the return to democracy in 1999.

The President of the Senate has made it a point of duty to distribute food materials worth millions of Naira to his constituents every Ramadan season. Similar gestures were extended to those in Damaturu, the capital of Yobe State and the Federal Capital Territory. Lawan has also constructed and still constructing several culverts across various parts of his Senatorial district to allow easy access to and from different villages and communities.

Provision of portable drinking water is one area where Dr. Lawan has also recorded landmark achievements. Hand pumps and boreholes especially those powered by solar have been provided across the Senatorial zone. In the previous year, the umbrella body of cattle breeders known as Miyetti Allah was given the opportunity to nominate locations for the provision of hand pumps in the North East zone.

During his last visit to his constituency, Lawan directed that the number provided in the previous year be doubled while 36 solar powered boreholes which the herdsmen did not enjoin until now be constructed in selected RUGA settlements chosen by the herdsmen themselves.

As part of measures to ensure the provision of electricity to the people of his constituency, the Senate President purchased and distributed several numbers of transformers across Yobe North Senatorial District. Many locations are also enjoying night illumination as a result of solar powered street lights provided across the local government areas that makes up the Senatorial zone.

The Mother and Child Hospital currently under construction and nearing completion along Yusufari road in Gashua was facilitated by Lawan. In no distant time, the hospital will be commissioned to provide adequate healthcare for mothers and children both within and outside the environs.

There are other numerous projects that Senate President Ahmad Lawan has embarked on for the people of his constituency. One may not have heard much of them in the media because SAIL, as he is fondly called, is a silent achiever and a man of little words but plenty action.

He has shown love to his people and his constituents have reciprocated by constantly returning him to the National Assembly to represent them. Only very few lawmakers in Nigeria have attained this feat and it cannot be out of sheer luck. It’s with the people.

God bless His Excellency, Distinguished Senator Ahmad Ibrahim Lawan, President of the Senate and Chairman of the National Assembly.