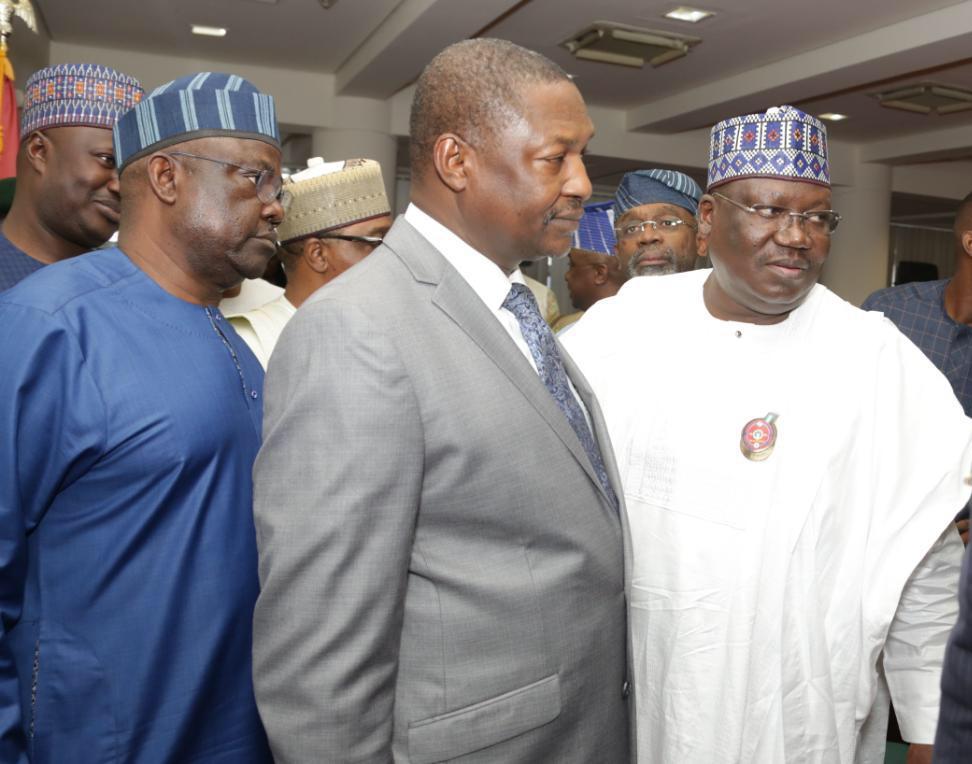 The Attorney General of the Federation and Minister of Justice, Abubakar Malami, on Thursday, met with the leadership of the National Assembly on developing a working relationship that would ensure seamless passage of bills.

Malami, for about an hour at the National Assembly, met with Senate President, Ahmad Lawan; Speaker of the House of Representatives, Rt. Hon. Femi Gbajabiamila and some principal officers of the Senate.

Malami told his hosts that the major issue of interest to the Office of the Attorney General and the Government is having a harmonious working relationship that is targeted at advancing the interest of the nation.

Malami expressed concerns that several bills presented to the eighth National Assembly were never passed nor assented to because of certain inadequacies or constitutional issues.”

“Enormous resources, energy and cost have gone into legislative process of lawmaking, and I feel the time is now right for us to work together for the purpose of eliminating the associated bottlenecks that have constituted hindrances to the passage of the bills and assenting thereto.

“My beneficial approach is to look at the possibility of working together between the executive and legislature; and where the need arises, the judiciary, in working on the bills before they proceed to the stages of public hearing.

“We cannot afford to expend resources, time and energy in formulating and drafting bills that will eventually not be passed or assented,” Malami said.

Malami suggested, as a way forward, sending advance legislative proposals for possible review and inputs of the lawmakers even before the final consideration of the draft bill by the Executive.

In his response, the Senate President described the meeting as an “historic engagement” and commended the approach of the Executive.

Lawan said the present cordial relationship between the Executive and the National Assembly should be one driven by mutual respect and consultation between both arms of government.

“Our relationship should be based on mutual respect and consultation. This is a clear demonstration of the kind of consultation we have been talking about.

“We shouldn’t work at cross purposes; and beyond bills, we need to extend the consultation to other spheres of engagements for us to achieve optimal performance,” Lawan said.

According to him, the meeting was an important and historic engagement between the Office of the AGF and the current leadership of the National Assembly towards achieving a working relationship that would facilitate the seamless passage of bills and their assent by the President.

“This shows the kind of relationship that characterise the ninth National Assembly and the Executive arm of government, which essentially is for the benefit of Nigerians, the people we represent,” Lawan added.

“There are three major functions of the legislature; the oversight, representation and legislation.

“Legislation is a fundamental pillar of what we do here. Your office is in charge of executive bills that find their way to the National Assembly and therefore, this is an effort by the executive arm of government to ensure legislative processes that will start from the executive to the legislature or vice versa, should be seamless, speedy passage and effective implementation for good governance.

“When we process a bill, so much resources, effort and commitment are put into it; so we have to do everything possible to ensure that the processes are such that the outcomes justify the enormous resources put into the processing of the bills.”

To ensure a hitch-free passage of bills, the leadership of the Senate and House of Representatives along with the Attorney-General of the Federation at the meeting underscored the need for committees to be constituted on both sides of government for the purpose of engagement.

“If there’s anything we identify that will cause us not to pass a bill, we will draw the attention of the executive to it and mandate our relevant committees to engage with the concerned agency and the AGF’s office so that all such issues are sorted out.

“We should have our bills assented to, whether they are executive bills or private members’ bills.

“This relationship is productive so far, it is working and helping this country and we will continue with it. However, that is not to say that we will compromise on things that are our mandate,” Lawan said.

The Senate President also called on the AGF to ensure that heads of agencies are carried along in the process of drafting executive bills to avoid sabotage from any quarter.

“I want to advise, that when an executive bill emanates from you, exhaust all opportunities for heads of agencies that will be affected by the eventual passage of the Bill into law to participate.

“Let them put in their ideas before you roundup work on the draft that will be sent to the National Assembly for consideration.

“Often times, heads of agencies deliberately refuse to attend public hearings, and when the bills are passed and sent to the president to sign, then they go around saying things about the bill stopping government from working and so on.

“The National Assembly would do everything to ensure optimal productivity, but those civil servants who sometimes feel they would lose power and authority would attempt to jeopardize the assent of the President.

“This is something that we have to address. When there’s a public hearing on a bill, we will make it mandatory for heads of agencies that are supposed to participate to attend. If they don’t attend, they shouldn’t go back to the President to advise against the assent to such bills.

“The government put in a lot of effort and resources, and we do the same. But one individual, like a Managing Director or Executive Secretary, who feels he or she may lose part of his mandate to another agency, may go ahead to sabotage the whole process. We need to guard against that.”