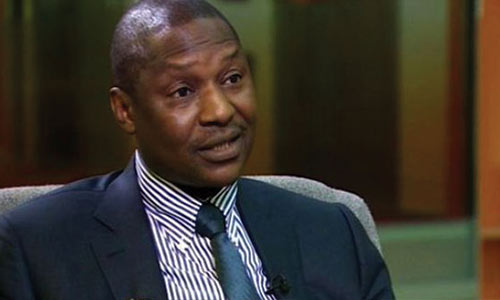 The Attorney-General of the Federation, Mr Abubakar Malami, (SAN) has asked the Independent National Electoral Commission, (INEC) to allow the All Progressives Congress (APC) Zamfara State, field candidates for the general elections.

Malami, who doubles as the Minister of Justice, made the call in a letter to INEC dated February 13, and made available to the News Agency of Nigeria (NAN).

The minister said that INEC could not foreclose the right of a political party to participate in elections without recourse to the Act.

“My office received a petition from the firm of M. A. Mahmud, (SAN) & CO, in respect of the need to urgently consider Sections 38 and 39 of the Electoral Act and extend the time for the APC Zamfara state to field a gubernatorial candidate in the light of a Zamfara High Court judgment in suit No.ZMS/GS/52/2018.

“The letter was requesting that the subsisting judgment in the suit be upheld and respected by INEC, as the Court of Appeal has upheld the appeal with No. CA/S/23/2019; thus effectively annulling the grounds upon which the purported cancellation of the APC Primaries in Zamfara state by INEC was based.’’

Malami, in the letter invited INEC to comply with the judgment of the Court of Appeal by admitting the results of the APC Zamfara state primaries.

He also invited INEC to comply with the provisions of Section 38 of the Electoral Act, which empower the commission to postpone the election for the governorship, National Assembly and House of Assembly elections.

He said this was in view of the fact since the Court of Appeal had upheld the primaries as valid; the APC in Zamfara state would need a little time to catch up with its contemporaries in the election.

“Granting them this concession is not necessarily a favour but a right that inures to all contestants under similar circumstances.”

The AGF maintained that by the doctrine and principle of judicial precedence, the appeal superseded the Federal High Court’s position which foreclosed APC Zamfara state from fielding candidates in the February and March general elections. (NAN)