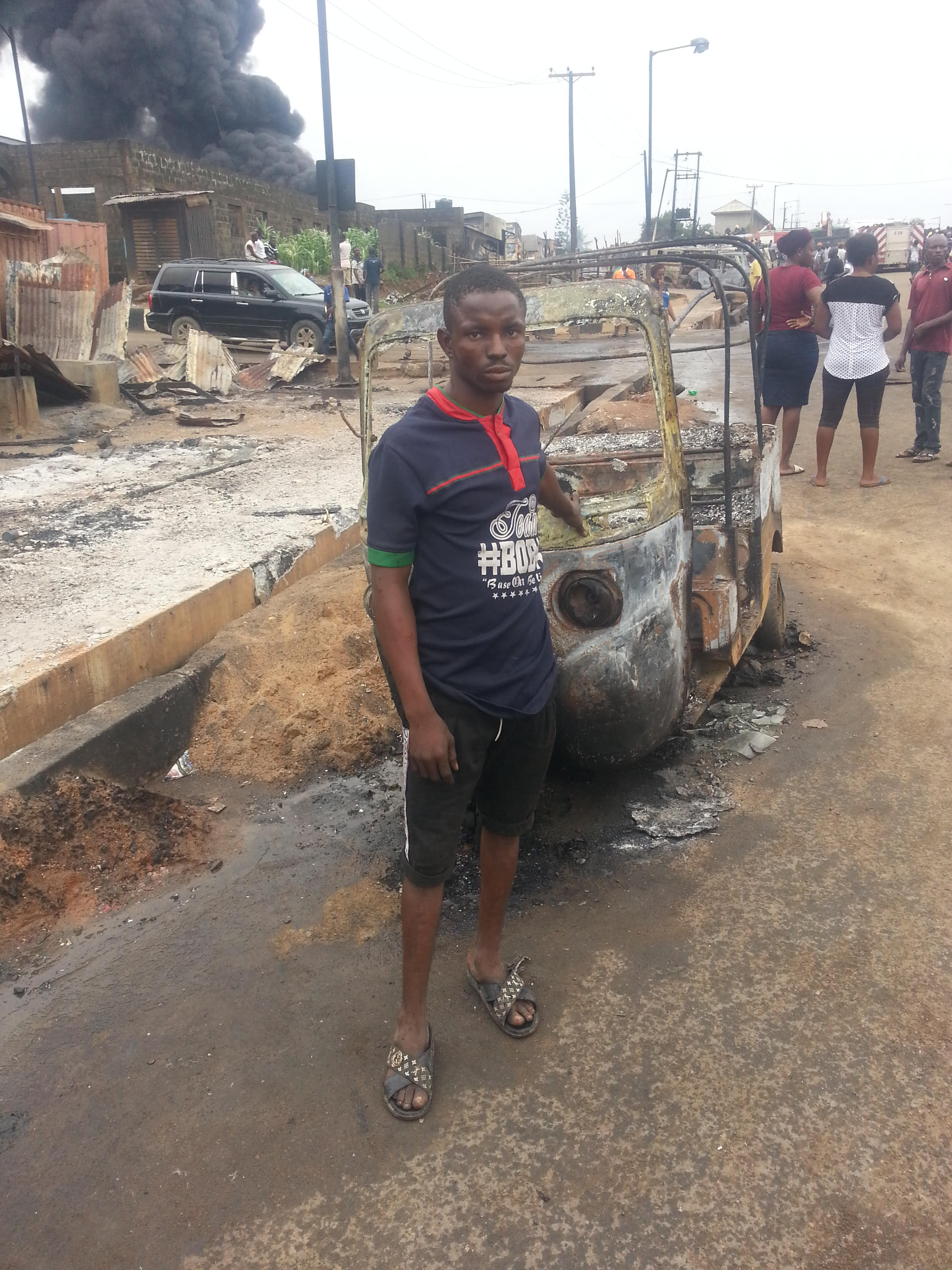 Victims of the oil pipeline fire incident that ravaged Fire Junction, Ijegun, in Alimoso Local Government Area of Lagos State early last Thursday are now picking up the pieces after unexpected losses. The victims, mostly traders and transporters, woke up as usual, hoping to go about their normal businesses, only to discover that their shops and commercial buses had been burnt to ashes.

The fire was caused by the activities of pipeline vandals, who sneaked into the area about 2:00am, on Thursday, July 4, 2019, with four petrol tankers to siphon petrol. They had succeeded in moving two of the tankers out before security agents confronted them.

In the midst of the confrontation, the fire ignited, and destroyed property, worth millions of naira.

A resident, Isiaka Michael, said the fire started about 5:00am. He said when the security men came, one of the tankers, already loaded with petrol, went up in flames, while the remaining one was successfully moved out by the police.

Some of the affected property sighted by the reporter were 13 shops and about 35 vehicles. Part of Ijegun Primary and Ijegun Senior Grammar School buildings were also torched.

Lamenting his fate, Hasan Alim, a 30-year-old father of one, said he lost his tricycle, which was given to him barely a week earlier on hire purchase.

He stressed that he has not paid up to N 100,000, on the tricycle, which worth N 700,000 with registration and permit. He spoke with the reporter in tears, as he stood near the carcass of the tricycle in total disbelief.

He said: “I just collected this tricycle on hire purchase. It worth about N 700,000, with the registration. I have not paid anything on it. I don’t know what to do now. What would I tell the owner? I am sure I will end in prison; my life has finished. I was at home when the fire started, I came out with it, to assist my brother, to evacuate the goods in his shop. As we were about opening the shop, fire just came out from the drainage, everywhere was covered by fire. We all ran away. That was how the fire razed all the shops and cars parked along the road.

Another victim, Ismail Kazeem, a father of three, said his welding shop, was also razed by the fire. He lamented that all hope was gone, as his welding machine and generator were both destroyed.

“We are finished. All the shops here are gone. Where will I start from? My welding machine and big generator are gone. The lady beside me just opened her hair dressing saloon, not up to one month. She equipped it properly; now everything is gone. Even the shoe maker here, he just finished manufacturing new shoes. He went to market today to buy materials, all the shoes were burnt by the fire.”

Another victim, Amina Buky, said she just bought hundreds of live chickens, but the fire killed all of them. She said: “look at my chickens, I just bought them. Not even a single one was saved. The fire killed all of them. The cage was filled up with live chickens. Where will I start again? In this Nigeria where there is hunger and poverty everywhere, who will I run to for help?”

The Information Officer of the National Emergency Management Agency, NEMA, Mr Ibrahim Fariloye, said he received a call about the fire incident around 5:00am. He quickly called NNPC head office, to shut down the supply from the main source, to avoid the fire, getting close to the valves. He said they were having about 500 meters from the first valve, and the second valve was more than 500 meters. He said:” I called the NNPC to shut down the valves, to stop the supply. Once they shut down the valves, the content remaining in the WO ends of the valves have to burn out before you can successfully put off the fire. So the fire we are seeing now, apart from the one from the source, we have the one from the tanker. The main cause of the fire, is the activities of pipeline vandals. As we were trying to arrest them, they ignited the fire.”

According to him, twelve of the vandals were arrested, four had serious burns, while eight sustained minor burns.

“Four tanker were brought in here, they succeeded in moving two out, one has been impounded by security agents, while one was consumed by the fire. So far, about 31 vehicles were affected. We recovered two unknown casualties,” Farinloye added.

From COZA to RUGA and Abbo, the people are speaking