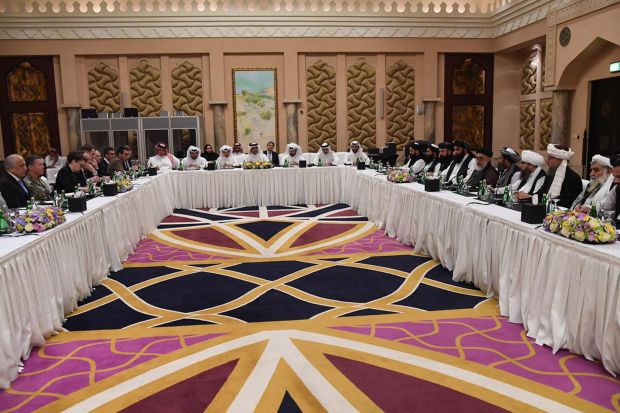 A planned meeting of an Afghan delegation with Taliban representatives in Qatar was postponed to an unknown date, due to disagreements over who would be going, several designated attendees said on Thursday.

One conference attendee, Jaweed Kohistani, said that a number of influential Afghan politicians, such as former President Hamid Karzai and some powerful Jihadi leaders were not happy.

Kohistani said they were not pleased especially with the make-up of the 250-member delegation the Afghan government had announced on Tuesday.

The political expert also added that Taliban were also not happy with the list.

“A group of politicians and presidential candidates sent a new, downsized list to the presidential palace for approval on Wednesday and were waiting for a response from President  Ashraf Ghani,’’ Kohistani said.

The delegation was supposed to leave for Qatar on Thursday.

Meanwhile, a source at the presidential palace confirmed, on condition of anonymity, that the meeting was postponed for now, without giving further details.

Another designated attendee, parliament member Raihana Azad, confirmed that the meeting was postponed for now.

Azad added the Taliban were not happy with the high number of women in the delegation, about 40 0f them, meanwhile they gave approval for only a small number of women to attend the meeting.

On Wednesday, the Taliban mocked the list, saying that the Afghan government was trying to sabotage the conference by sending too many people.

It would have been the first time that Taliban representatives would speak with government officials.

Recently, they had indirectly accepted to meet with government officials in Doha, saying however that they would be seen as private citizens. (NAN)

‘Temporary wooden cathedral’ll to be built beside Notre Dame’