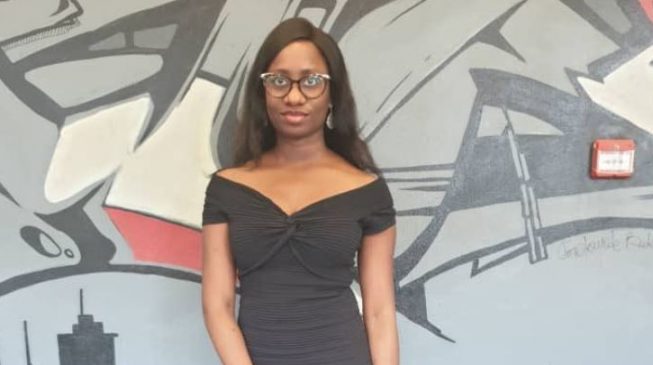 Adewura Bello, a lady who was declared missing on May 15, has been found dead in a canal in Lagos.

Adewura, the 26-year-old accounting graduate of the University of Lagos (UNILAG), was said to have gone missing on Wednesday after she boarded a bus from Ikeja to Egbeda, where she lives.

According to Fadesola, Adewura’s sister, the last time she heard from the deceased was when she told her she was on her way home.

“I spoke with her around 7pm on Wednesday. She works at Ikeja and she told me she was on her way home. Then, when it was raining around 7:55pm, I called again. This time it rang but she did not pick. So, I assumed it was the rain,” Fadesola said.

“But we did not see her after the rain and the next time I tried her number, it said it was unavailable and later said switched off.

On Sunday, Benjamin, a cousin to the deceased, tweeted that Adewura’s body has been found in a canal.

“Thank you all for the search. Adewura is Dead. Her Body found in a canal. Heaven has gained an angel. We depart to meet again till we Meet again Adewura. Forever in our Heart. God, I am in pains but who am I the question you. Rip,” he tweeted.

Meanwhile, on Tuesday, a Twitter user with handle @Otunbakush had posted that a lady, who was was reportedly swept away in a flood, matched Wura’s identity.

“So, on this missing lady’s issue, heard some guys talking about a lady that got swept away around that Mosan Canal area during d heavy downpour on Wednesday, heard d lady was on bike, the description of the lady match Wura’s identity,.I heard people told d bike man not to pass.” the user said. 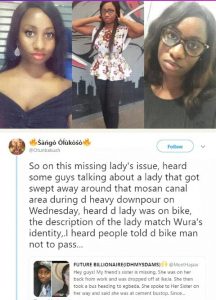