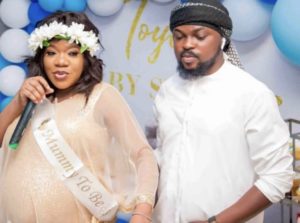 The news of her delivery came after pictures of her wedding to colleague, Kolawole Ajeyemi, surfaced on social media platforms.

The News Agency of Nigeria (NAN) reports that the 34-year-old filmmaker was previously married to Nigerian actor, Adeniyi Johnson, from 2013 to 2015.

Abraham had initially left her over three million fans on Instagram shocked days ago by deleting all of her posts on the platform.

The Auchi born actress started her acting career in 2003 and had since then produced and directed many movies.

Friends and colleagues have congratulated her on the birth of her son by posting photos from her baby shower.

Actress, Iyabo Ojo wrote, “this is the Lord’s doing and it is marvelous in our sight.”

“And to the man that brought this much happiness and everything laughter to your life, uncle may your star continue to shine forever,” she wrote. (NAN)

Kogi: I will be the voice for the voiceless women says female aspirant