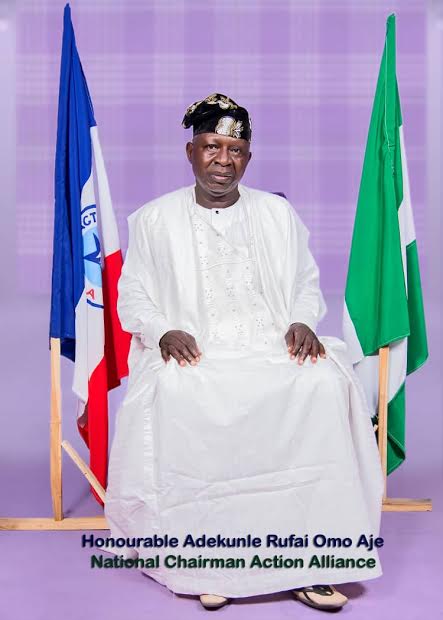 An astute politician, international automobile businessman and renowned entrepreneur, Hon. Adekunle Rufai Omo-Aje  is the newly elected National Chairman of the Action Alliance (AA), one of the registered political parties that survived the deregistration hammer of the Independent National Electoral Commission (INEC).

How long have you been in politics?

I have been in politics since the second republic. I was previously in the defunct National Party of Nigeria (NPN), then in the All Peoples Party (APP) that later became the All Nigeria Peoples Party (ANPP). Subsequently, I joined the Action Alliance in 2005.

Have you ever held any political office?

Yes of course. I was elected Councillor at Ede South Local Government in Osun State on the platform of the ANPP against all odds. My mentor and former Governor of Osun State, the late Senator Isiaka Adeleke, with whom we were together  in the ANPP crossed over to the Peoples Democratic Party (PDP), but I refused to move with him. People thought I had signed my political death warrant. The magnanimous Adeleke said I should be left alone to test my popularity. The election was conducted twice and I won twice as the only ANPP candidate in the whole of the Local Government.

And till his death, I was still very loyal to him. May his soul rest in perfect peace. In fact, his untimely death was a great loss not to us alone in Ede and Osun State, but in Nigeria as a whole. We can never forget that great generous man. The wound of his death has not healed in our hearts.

What are your plans for the party as its leader now?

In fact, we are set to spring a very big surprise in the 2023 general election. Mark my words. But our strategy towards that would still be kept under wrap for now.

How did the party survive deregistration?

Deregistration carried out by INEC did not apply to Action Alliance. Action Alliance has elected office holders following the general election of 2019. Thus, INEC could not have deregistered a party that has elected candidates at different levels of government. Besides, our Party has presence all over the country. With all due respect to the parties deregistered by INEC, Action Alliance met the Constitutional and statutory requirements to remain in existence.

Do you support deregistration and why?

I support deregistration carried out by the INEC only to the extent that the parties deregistered fell short of the Constitutional and statutory requirements. The truth is that the ruling party, APC and the major opposition party, PDP, have both failed in their promises made to the people. The country continues to experience massive economic imbalance and exodus of the youth, who are the productive human resources abroad. There is therefore a need for quick revamping of the economy and it is only the third force parties that can achieve this. APC and PDP have been tested and their results have been very poor.

What are we expecting from your party in 2023?

Action Alliance serves as a beacon of hope for Nigerians. It’s not in doubt that both APC and PDP have failed Nigerians. In the last general election, our Party produced two House of Representatives members. We also produced eight House of Assembly members. We are positioned to do better. By 2023, Nigerians from all nooks and crannies would have identified Action Alliance as the Party to rescue Nigerians from the insecurity and quagmire currently being experiencing in the country.

But before then, what is your suggestion now for the government on the security challenges in the country?

Insecurity is a global menace. It’s not peculiar to Nigeria. However, the approach to finding solutions to insecurity in Nigeria has been inadequate. Both APC and PDP have politicised security challenges in Nigeria. At this juncture, we need to get to the root of the challenges in Nigeria. Education is a vital tool to curb insurgence. Until the mind-set of the youth that serve as their recruitment materials is corrected, we are not likely to see the end of the chaos soon.

As a true born of the State of Osun, how can you assess your Governor, Isiaka Adegboyega Oyetola?

Governor Oyetola has been a wonderful Governor since he was returned elected. He has continued to pilot the affairs of Osun State in a way no one expected. I commend him for that.

Should the government or INEC fund political parties?

It is right for the government to fund institutions that are critical to our democracy. In a country like Nigeria, there are third force political parties with good manifestoes and intentions but could not project themselves to the electorates due to lack of fund. The bigger parties however spend billions of naira for their activuties. Thus, in order to give parties equal footing in terms of funding, I believe government or INEC should fund parties. However, I do not believe that Government or INEC should completely fund political parties. Partial funding is desirable so that members of the parties should be able to be committed through financial contributions.