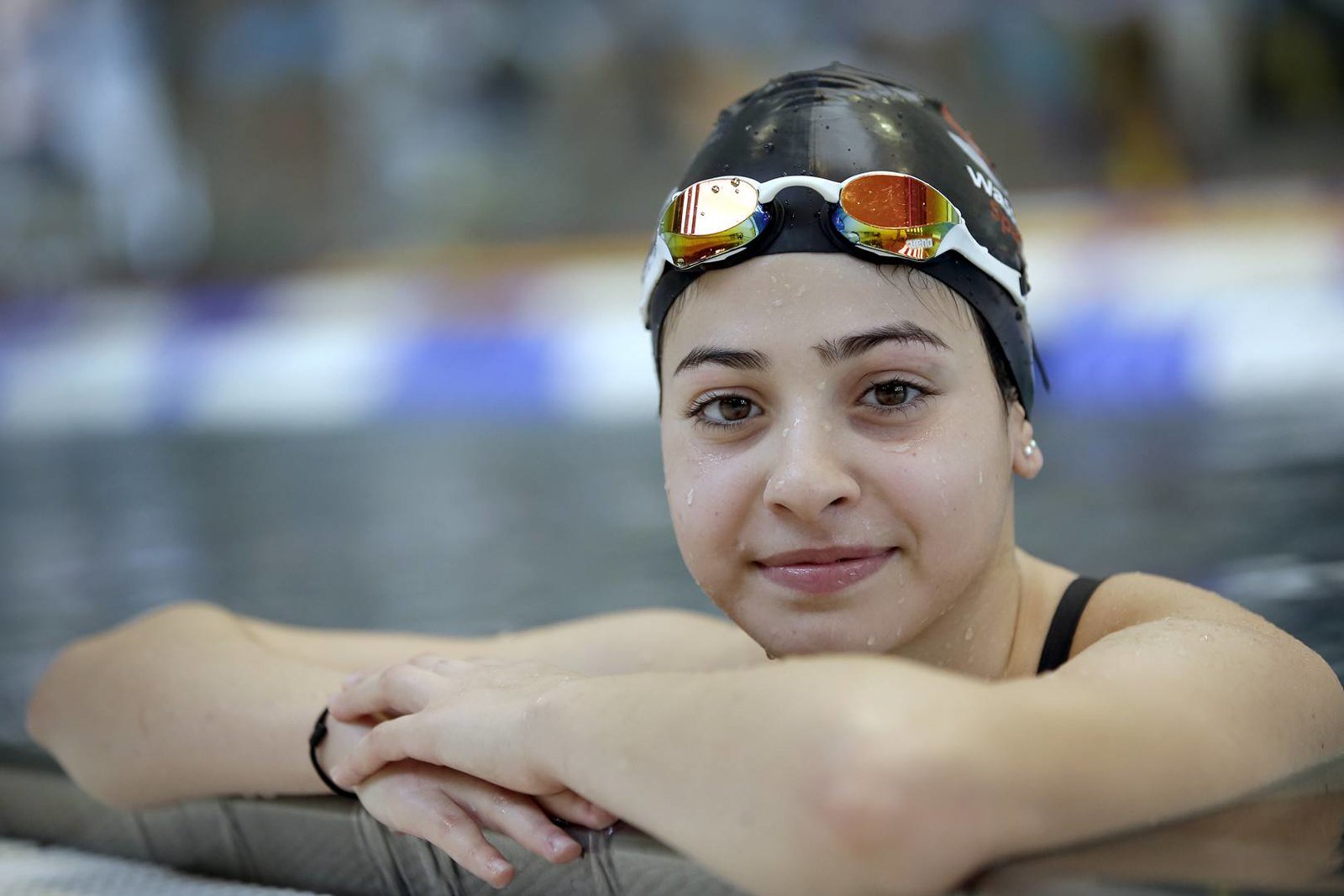 The story of her great escape from war-torn Syria reads like a fictional adventure: From Damascus to Lebanon. Beirut to Istanbul by plane. From Turkey to Greece with a boat. Then Greece to Macedonia, most of it walking or with buses, whatever you find. The borders, you always have to walk across because you’re crossing illegally. Then from Macedonia to Serbia. Serbia to Hungary. Hungary to Vienna. Vienna to Germany. It took 25 days.She landed in Germany literally on the eve of her 17th birthday. And all she had to her name, by way of property, were her cell phone and the wet pair of denim pants and T-shirt she was wearing.

One swimmer that is the cynosure of all eyes at the on going FINA World Swimming Championships is YusraMardini.

Mardini , a Syrian, fled the war in her country five years ago and, thanks to swimming, she has succeeded in turning things around for herself.

Mardini is one of the Refugees swimmers in Budapest. But this competition would be her last as a refugee, as she is set to become a German citizen in a few months time.

Mardini in this interview granted FINA’s media team, opens up on her life, her struggles and her dreams. Part of her story is that, a barely 17 years of age, she was forced to flee the war in Syria. She crossed nine countries and was nearly lost at sea before she arrived in Germany. And now, she’s back to Hungary. Budapest to be precise. And she’s didn’t travel here as an illegal alien.

Yes, you might know her name. You might know her story. You might remember her carrying the white banner of the Refugee Olympic Team into the Opening Ceremony of the Tokyo Games. Now the Syrian swimmer YusraMardini is saying goodbye to the squad. The Budapest 2022 swimming fiesta is her last competition as a refugee.

“It wasn’t really a decision,” she told FINA on Friday. “When you have the chance to apply for the residence as a refugee, you immediately do it.” So five years after fleeing war in her homeland, Mardini expects to receive her German passport in a few months, thus terminating her refugee status.

But she’s not retiring. Her next dream is to swim for Germany. “It’s a tough one, but I’ll try!” she said.

It’s not clear whether the 24-year-old athlete would make cut, but she has already written a book and is the subject of a Netflix film that chronicles her 2015 journey from Damascus through nine countries in 25 days, mostly on foot, but also through dark choppy waters on the open sea, clinging to a dinghy for three and a half hours at night after the boat’s motor broke down enroute from Turkey to Greece.

When the boat reached shore, Mardini was 17 and her wet jeans, T-shirt and a bag carrying her phone and a little money were all she had.

“It’s crazy to think that millions of people go through that,” she said. “I think about it a lot because I tell my story a lot. I was very, very lucky to be fine – and my sister, not to lose her.”

On Friday, after competing in two Olympics as well as the 50 fly and 50 free at the 19th FINA World Championships for the multi-national refugee team, Mardini discussed her past, present, and future.

What is your relationship with Syria now? Have you been back? Is it legally possible?

As a refugee, I can’t go back. If I go back to Syria, I lose the rights to have residency in Germany. When I have the German passport, I have no clue if I can go back, but I won’t because of war. Most of my [extended] family members are still in Syria and I’m friends with the Syrian team. They’re here as well, two swimmers. But my mom, dad, two sisters and I are in Berlin now.

How would you describe your emotional connection to Syria, even if you can’t be there physically?

To be honest, a huge part of my heart is still in my country. I always think about it. I don’t know if I’ll be able to live there again, but I definitely want to visit again one day. I want to see my friends, my family. I miss the food. I really, really love my country. I left it when I was only 17. I was very, very young. But I still miss it every day.

Are you still in contact with your old schoolmates?

I’m still in touch with some of them, but people drift apart, even if you’re living in the same country. And when you start a new life, you focus on new friends, building a new community, learning a new language. Everything was new. It was so-so busy.

You were a swimmer as a child. Did you go to a public pool, or a special training place?

I grew up in the capital city, Damascus, in a family full of swimmers. We trained at an Olympic 50-meter pool. In the summer, we trained outside, also 50 meters. We have lots of pools – more than Europe. In Arabic countries there are lots of pools.

I’ve talked to women who swim for Qatar and it can be a challenge for cultural acceptance, even their own decision-making when it comes to covering, if they’re Muslim. Did you have that struggle?

Yeah, I am Muslim. My family was very supportive. My dad was my coach and loved swimming so much. And yeah, it’s tough. It’s very complicated to explain to someone in the Arabic world that you are a professional swimmer. They think: she has to stop swimming or dress well, or whatever. They don’t understand that the people in the pool are like your siblings. You know them since they are there. But isn’t it tough everywhere for women, whether in sport or outside the sport?  We do not get back as much as we give.

Have you finished university? If so, what and where did you study?

I did not finish university. I did not even start, but I probably will. Hopefully, I want to study something with entertainment. I love acting.

When you escaped Syria, where did you stop before ending up in Germany?

I left from Damascus to Lebanon. Beirut to Istanbul by plane. From Turkey to Greece with a boat. Then Greece to Macedonia, most of it walking or with buses, whatever you find. The borders, you always have to walk across because you’re crossing illegally. Then from Macedonia to Serbia. Serbia to Hungary. Hungary to Vienna. Vienna to Germany. It took 25 days.

It must have felt like it would never end.

Yeah, it’s crazy but I tell the story as much as possible, to bring more awareness to the refugee topic. You know, when people see me, they’re like, ‘Oh, you don’t look like a refugee.’ I’m like, ‘What does a refugee look like?’ So it’s good to tell your story and show that there are success stories and that it’s not all tragic, you know?

Since you’ve been here at the Budapest World Championships, have you talked to anyone from Ukraine to hear how their lives are going?

To be honest, I don’t know if they want to talk about it. They’re here, first of all, to forget about it probably. And second of all, they also have goals in their swimming. Whenever I was in the pool, in a competition, I don’t know if I wanted to talk or think about something like that. I cannot imagine what they’re going through right now or their feelings every day watching the news about their country. I’m really, really heartbroken for them. But I also have so much respect for them that they’re here, that they’re still competing and they’re still representing their country. Massive respect on my part.