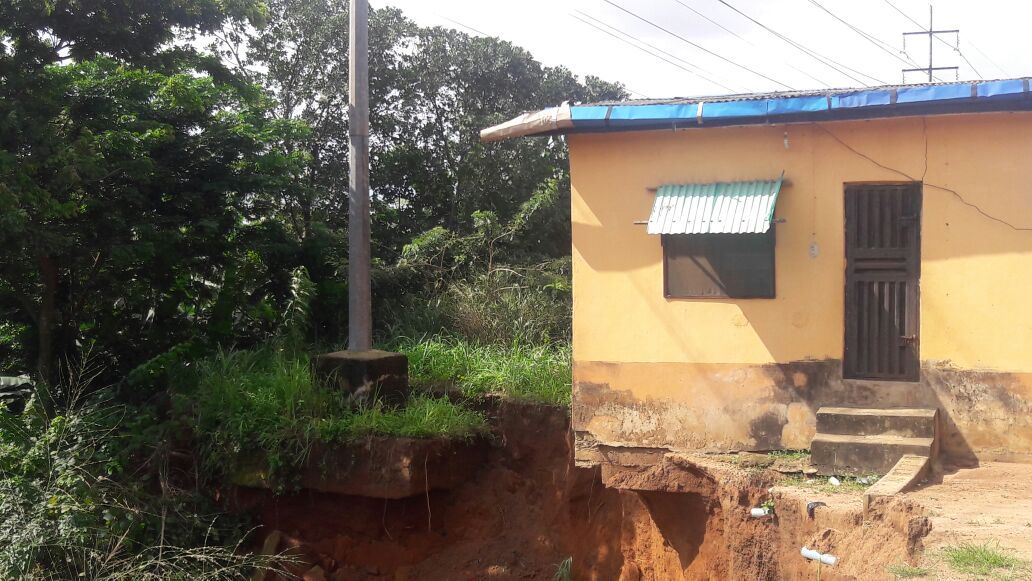 Residents of Iquita and its environs, Oron Local Government Area, Akwa Ibom State have appealed to the Federal Government for help over the menace of gull erosion confronting the area.

The News Agency or Nigeria (NAN) reports that the big gully which is eating deep into residential areas of the local government has damaged a lot of houses and forced a lot of people to move out of the area.

Some of the residents, who spoke with NAN on Thursday, said the situation had been threatening the area for some years, destroyed so many houses, and forcing a lot of them to become tenants to others.

Pastor Gideon Ettia, a resident, who decried the incident, said he was not aware that such a situation would occur in the area before he decided to build a house in the area.

“I came to build my house in this place and as at then, there was nothing like this and I believe it is erosion which is passing through the adjoining streets down here,’’ he said.

According to Ettia, many government agencies have visited the scene to assess it, but noted that nothing has been done to give the residents hope of surmounting the problem.

“We are at the mercy of God here and those of us left behind don’t know what may happen; you may just wake up one day, before you know another house will be gone.

“I want government to come to our aid to fix this place for us. If they government do that, I believe it will be something that Oron people will be happy about.”

He also pleaded with both Akwa Ibom and Federal Governments to intervene in the matter to avoid further escalation.

Mr. Friday Bassey, another resident, explained that some of the residents living within the area were currently under the threat of erosion since nothing had been done to rescue the situation.

Bassey said though the residents made series of complaints to the state government at different occasions over the incident, no attempt made to savage the situation.

He, therefore, appealed for urgent intervention by both the state and the federal governments, stressing that further escalation of the situation might cause disastrous consequences in future.

Mrs. Hannah Efiong, whose house is seriously affected also made appeal to government to assist the community to curb the erosion menace in the area in order to give them a sense of belonging.

Okon, who spoke with NAN in a phone interview said that though the attention of both State and the Federal Government had been drawn to the situation ‘’they were yet to respond.’’

He said the entire people of Oron would be happy, if Federal Government in particular could come to rescue the situation.

“It is a very big challenge to those living in Hospital lane, Elvis Okpo Abasi, Etim Inyang streets and others. I pray that Federal government would come to our help as the challenge is beyond local government financial strength,’’ he said. (NAN)