...Father offers kidney but says no money for transplant 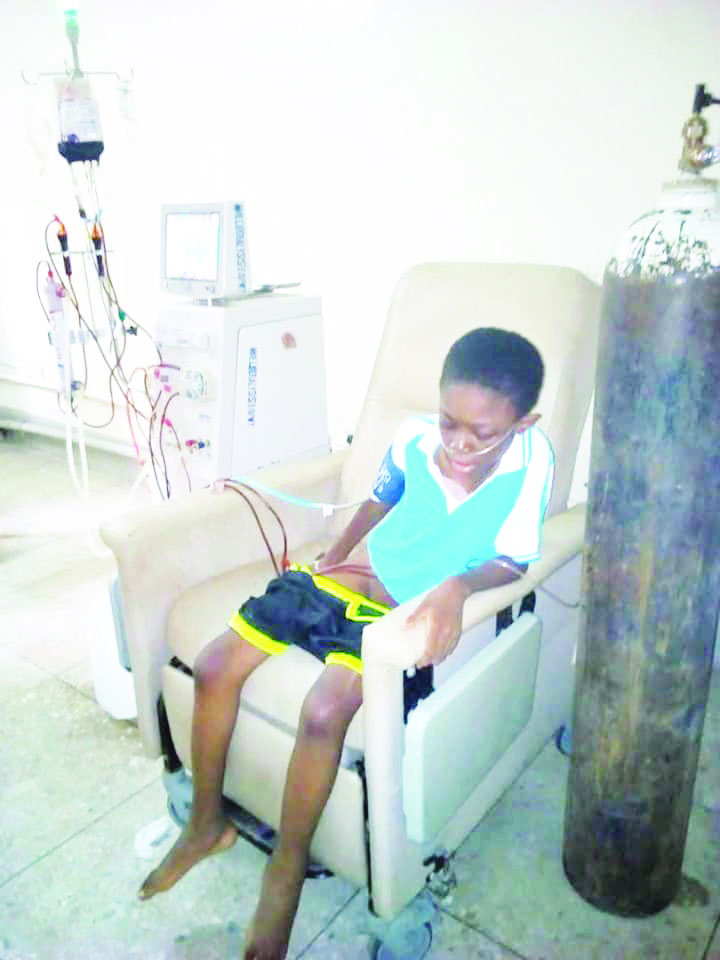 For Mr. and Mrs. Ibitayo, life has not been rosy. Their challenge is not of the basic necessities of life but of pain that borders on life itself. It is all about the survival of their only child, years after they lost their first child to kidney failure. Sadly, the same ailment has ravaged and kept their only surviving child, battling for life in the hospital since last year.

The couple, residing at No. 1, Ijao Street, Okemi Quarters, Ogotun-Ekiti, in Ekiti State, said they lost their first child, Buky Ibitayo, to kidney disease. They said she died after they could not afford the bill for her  treatment. According to the distraught mother, Mrs. Ibitayo, after the demise of Buky, they consoled themselves with their only surviving child, Precious Tolulope, hoping that she would live a healthy life and never to experience what her sister went through. But their hope has been dashed, as 14-year-old Precious is now battling with the same affliction that killed her sister, who died at the age 10.

The teenager is currently on life support machine at the University College Hospital (UTH), Ibadan.

Mrs. Ibitayo added that Precious had been sick since November, 2018, as a result of End Stage Renal Failure, same ailment her late sister suffered. So far, Precious has undergone 77 series of dialysis and still counting.

Mrs Ibitayo said: “We never knew that we would pass through this again. Her sister died at age 10, of same ailment. Precious was 13 years old, when she was diagnosed of same ailment. Now, she is 14, still on a machine in the hospital. We have exhausted all avenues we can borrow money from to take care of her. She is battling for life now. She is our only surviving child, if anything happens to her that means we are doomed. My husband is the one that wants to donate his kidney for her now. The hospital has given us the cost of the transplant, but we don’t have the money to pay.”

The medical report, dated December 24, 2018, as at the time she was admitted at UCH, Ibadan, signed by Dr. D. A. Ademola, with hospital number, 136934, made available to the reporter, noted in part: “Medical Report, Ibitayo Precious, 13 years. The above named was admitted via the children emergency ward of the UCH (referred from Ekiti State University Teaching Hospital) on the 12th of November, 2018, on account of recurrent excessive thirst of 9 years duration, recurrent stiffness of the finger of 4 years duration, easy fatigability of 8 months duration, reduced urine output of 5 days duration and altered sensorium of 1 day duration. There was associated history of vomiting 4-5 episodes a day. Progressive generalised weakness, loss of appetite and recurrent finger joints and loin pain with photophobia.”

From the report, one can easily come to the conclusion that all has not been well with little Precious for a long time. The report noted that the examination at presentation revealed a chronically ill-looking girl, with marked wasting and hypothermia. It also revealed that she was in respiratory distress, her liver was 3cm, below the right costal margin but not tender, bilateral grade 3 renal parenchymal disease. It added that she had 16 sessions of haemodialysis and had blood transfusions (intradialysis) on two occasions over the six week of admission, and also had recurrent episodes of pulmonary oedema, which responded to regular dialysis.

On his own account, Mr. Ibitayo, who spoke with the reporter on phone, said he had volunteered to donate one of his kidneys to his dying daughter. He said he trades in local rice, but the situation of the family has put him out of business, thereby, rendering him financially crippled and unable to take care of the medical bills again. He said: “We have been taking care of her since last year the sickness started badly. I have volunteered to donate my kidney to save her. She is our only child now. I had lost her sister to same ailment in the past. So, I would not want her to die too. The hospital has given us the cost for the transplant, but we are financially handicapped. She is still in a machine at UCH.”

The projected cost of treatment for Renal Transplant, signed by A. O. Ola (Mrs.) for Chairman, Medical Advisory Committee, for Chief Medical Director of UCH, also made available to the reporter, is N6,280,000

The cost, according to the document, is an estimate, which is subject to change during treatment.