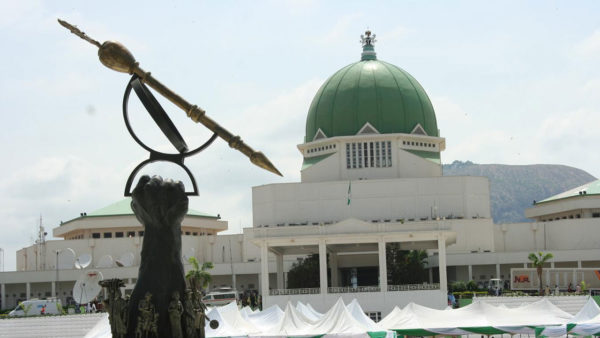 The National Assembly complex gets face lift as workers are seen in strategic points around the premises renovating structures that had lost shape and fixing new ones.

The News Agency of Nigeria(NAN) reports that one of the structures, a statue of the mace, the symbol of authority of the legislature, which is strategically placed at the entrance to the complex, was being repainted.

Also, the roundabout leading to one of the entrances from behind is being reconstructed among other reconstruction works.

Meanwhile, lawmakers, particularly those not returning to the Ninth assembly have started moving their personal effects from the complex.

The evacuation started in earnest on Friday, with offices, which were hitherto adorned with several ornaments and photographs being almost bare with only few items other items belonging to the National Assembly been sighted.

Sen. Matthew Urhoghide (PDP-Edo) told NAN Correspondent that there was nothing new about the development.

He said it was a ritual, carried out every four years because of change of government.

He noted that, “it is nothing unusual. When one session of the assembly is winding up, there will be emergence of a new session.

“The movement of materials, books and all of that is not unusual. The tenure is 2015 to 2019 and it is the day the President will be sworn in that the date for dissolution of the Eight Assembly and commencement of Ninth Assembly will be announced.

“In view of that everyone has to be prepared so that by the time he pronounces it, within a day or two the time will be up.

“Our colleagues, particularly those that are not coming back have to get their belongings out of the premises.

“Even those that are coming back have to move because the office arrangement is based on ranking and positions that we hold.

“So, we expect that by next week, the offices that we have get into, start getting clearer, ” he said.

He said,” we have been given clearance forms that will filled and everybody is going to be cleared.

”Offices will be visited and inventories that were taken in 2015 will be looked at. If there are things you need to pay for you do that and they know how to get the money for those who are interested.

“So, senators are dignified enough and would not take anything that does not belong to them without the necessary agreement.

” Is it chair that one would take or television or fridge or table. There is really nothing here to be taken. I furnished this office with my money. So, if I carry my carpet away,it is mine.

“The national assembly did not furnish the offices.”

On renovations going on in the premises, the lawmaker said the management of the national assembly was getting prepared to receive the 9th Assembly.

“You know there has to be some renewal of buildings, and all of that. The edifices is getting newer and finer, ” he said.

Sen. Bukar Abba Ibrahim(APC-Yobe), said the development was necessary to pave way for commencement of the 9th assembly.

According to him, insinuations that government properties are being moved out by lawmakers is not true.

He pointed out that they were given lists of what belonged to them, the things they could buy and list of things they should not touch.

“If anybody does anything contrary to this provisions, then it is criminal,” he said.

Solomon Adeola(APC-Lagos) said the movement of belongings was because the inauguration of the 9th assembly was close.

He said, “it is particularly for those not coming back. They have to start moving their things to make room for the new lawmakers.

“The national assembly is coming to an end by June 9 and there will be a new set of lawmakers coming on board from June 11.

”So, it is expected that all present lawmakers vacate their offices.

“There is nothing like continuity. There is going to be a brand new assembly and offices will be allocated afresh. So all the keys must be handed over by the end of this session.”

The National Assembly is a bicameral legislature with the Senate or Upper Chamber and House of Representatives or Lower Chamber.

It was established under section 4 of the 1999 Constitution(Amended), with 109 senators and 360 house of representatives members.

The national assembly is modelled after the Federal Congress of the United States of America,ensuring equal representation of the 36 states in the senate irrespective of size in the Senate and proportional representation in the house of representatives.

In terms of responsibility, the assembly has powers to make laws as well as oversight activities of agencies of government.

It is also empowered to establish committees to scrutinise bills among other things.(NAN)