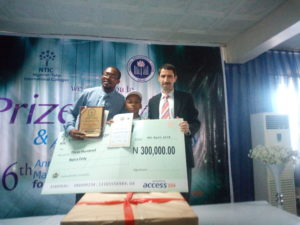 Nine -year- old , Enwere -Kingsley Ikenna who emerged winner of the 16th Annual National Mathematics Competition (ANMC) has said that the feat was the biggest opportunity he has ever had.

Ikenna said this in an interview with the News Agency of Nigeria (NAN) on the sidelines of the 16th ANMC and award on Thursday in Lagos.

NAN reports that Ikenna of Cuddy Kids School, Amuwo-Odofin, emerged overall winner of the 16th ANMC and won the gold medal with a score of 98.85 per cent out of 100 per cent to defeat over 39,518 other candidates.

The candidates, who participated in the competition, were drawn from the 36 states of the Federation , including the Federal Capital Territory.

The competition organised by the Nigeria Tulip International Colleges (NTIC) and the National Mathematical Centre, Abuja was to reward hard work for pupils who really devoted much time to surmount the phobia which their peers associated with mathematics.

Mr. Ercan Yilmaz, Principal , NTIC, Ogun State Chapter had said that Ikenna would get a full scholarship to NTIC with all expenses paid as well as N300,000 cash prize.

His teacher, Mr Kehinde Mukadas gets N200,000 while the school would get a digital printer and desktop .

Ikenna , also the second child of a family five, said he had previously participated in some competitions at some stages in life adding that this was the first time he was emerging a winner .

He said he worked very hard, studied relentlessly and put in all effort to win the competition.

The mathematics winner said his parents were formidable force that always pushed him to work hard and concentrate fully on his studies.

“The only challenges I had in the course of my preparation was distractions and fear, but my teacher was able to help me overcome it,” he said.

Ikenna urged other Nigerian students not to rest on their oars and not be discouraged whenever they failed but to keep trying till they succeeded.

“Even if you do not reach the top now, you will fall among the stars, ” he said.

His teacher, Mukadas, expressed joy that his students came first among other geniuses who participated in the competition.

Mukadas said he was hopeful that Ikenna would bag one of the top three in the competition because he was a diligent student who did not toy with his academics.

He lauded his parents for their unrelenting support, vital role and collaboration with him, to ensure that the goal was achieved.

“The competition is a big one and participants spread across best schools in Nigeria and so even if you know the capability of your students, you cannot guarantee and will remain in fear, until the result was declared.

“I am excited because of the performance of my pupil and I believe it will open doors for him to greater height and also give me recommendation for promotion or opportunity,” he said. (NAN)

Actress Belinda Effah takes on the role of Hauwa in ‘Haram’