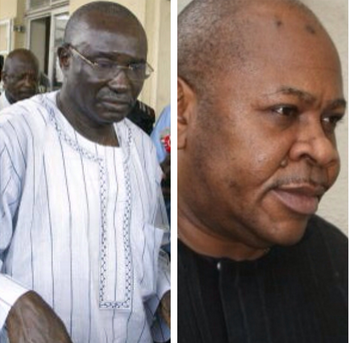 Mr Olalekan Ojo (SAN), the lead defence counsel for Fred Ajudua, a former Lagos socialite and alleged serial conman has alleged that the 8.4 million dollars Lt.-Gen. Ishaya Bamaiyi, a former Chief of Army Staff gave his client was initially to be used to bribe Lagos State judges and judicial officers.

Ojo made the allegation while cross-examining  Bamaiyi on Wednesday at an Ikeja High Court at the ongoing trial of Ajudua over the alleged fraud.

The defence counsel alleged that the former Chief of Army Staff gave Ajudua the funds to secure his release from the Kirikiri Maximum Prisons, where he was incarcerated over the alleged attempted murder of Mr Alex Ibru, the former publisher of the Guardian Newspaper.

Ojo said: “You lodged a complaint to the Economic and Financial Crimes Commission (EFCC) through Daniel Amos.

“The complaint was that the defendant, Ajudua and one Ade Bendel who is now at large, had with your knowledge and consent promised to bribe Justice Joseph Oyewole, some other judges of Lagos and some court officials.

“The bribe was to facilitate your release from prison. As a high profile citizen of Nigeria, are you aware that it is wrong and criminal to attempt to compromise judicial officers?

“Do you know that it is totally wrong to send someone who is a judicial officer to someone presiding over case in which you are a defendant?”
Bamaiyi in his response denied the allegations.

“It is not true, I did not attempt to bribe anybody, I know it is criminal to attempt to compromise judicial officers.

“I do not see anything wrong in sending somebody to anybody as long as I am sending the person for something reasonable,” Bamaiyi said.

Ojo asked Bamaiyi if as a veteran General, he believed in the marchreleian principle of the “end justifies the means” and agreed to Ajudua’s suggestion that he bribed judicial officers in order to be released from prison.

“If anyone was in trouble, they will find a way out, I wanted a good lawyer, Chief Afe Babalola was suggested to me by the defendant.

“I agreed to their suggestions because I thought they were truthful and because I wanted freedom.

“The suggestion was to get me a very good lawyer and not to bribe judicial officers,” he said.

The retired General denied admitting in his 2006 statement to the EFCC to agreeing to a suggestion by Ajudua that Justice Oyewole and other judicial officers of Lagos State be bribed to secure his release from prison.

Mr Seidu Atteh, the lead prosecuting counsel for the EFCC, however interjected telling the court that the prosecution team did not have of a copy of Bamaiyi’s 2006 statement to the anti-graft commission with them in court.

“My Lord we do not have a copy the witness’ 2006 statement to the EFCC which is the subject matter of the cross-examination, his 2014 and 2016 statements are here,” he said.

Reacting, Ojo sought an adjournment to enable the prosecution bring to court a copy of the Bamaiyi’s 2006 statement to the EFCC.

“We are constrained by reason of the default of the prosecution not coming up with all the EFCC statements frontloaded in the proof of evidence.

“We will like to seek an adjournment. In some other climes, the court will impose costs because as a diligent prosecutor that he is, he is supposed to come to court with all the statements,” Ojo said.

“It is the duty of the prosecution to come to court with relevant documents.

“This case is adjourned to May 8 at 11 a.m. and May 14 for continuation of cross-examination and trial,” the judge said.

Earlier during proceedings, Bamaiyi admitted during cross-examination to making a statement in 2006 to the anti-graft commission about the alleged fraud.

He, however, denied that one Daniel Amos who he had met at the Kirikiri Maximum Prisons who had allegedly lodged the first complaint to the EFCC on his behalf was his Personal Assistant.

“I know Daniel Amos, we were together in prison he has never been my personal assistant, he is my friend. I cannot remember the date he was brought to prison but he was with us there in Block Two.

“Daniel Amos left the Maximum Security Prisons before us, I cannot remember us having a discussion about the fraud but when you have this kind of issue it is no longer a secret.

“I instructed Daniel Amos to lodge a complaint against the defendant and Ade Bendel to the EFCC.

“I gave him the instruction because I was on admission at the Lagos University Teaching Hospital (LUTH) and was unable to make the complaint myself.

“I did not tell him all the material facts or issues. I told him I had a case that the defendant defrauded me and I had to make a case at the EFCC. I sent him to make a verbal complaint.”

NAN reports that according to the prosecution, Ajudua, was incarcerated at the Kirikiri Maximum Prisons over alleged fraud. He had alongside some accomplices, allegedly approached Bamaiyi in 2004.

The defendant had allegedly convinced Bamaiyi that he could hire the legal services of Chief Afe Babalola, SAN, to help secure his freedom from Kirikiri with Ajudua allegedly fraudulently receiving $8.4 million as legal fees.

When the alleged fraud came to light, the law chambers of Afe Babalola and Co, issued a disclaimer disassociating itself from the case. (NAN)

INEC presents certificate of return to Kano state governor-elect, others