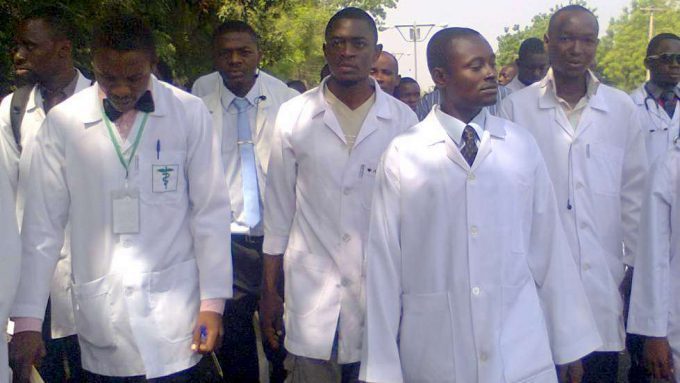 Reports have revealed that of the 70, 000 registered medical doctors in Nigeria, 30, 000 of them have sought pastures new overseas, leaving the remaining practicing their profession in Nigeria.

Dean, Faculty of Clinical Service of the College of Health Sciences, University of Jos, Dr. Victor Pam, made the disclosure, on Friday, at the induction ceremony of 60 newly-graduated medical students of the university, held at the Jos University Teaching Hospital (JUTH).

According to Dr. Pam, 30,000 registered medical doctors in Nigeria are practicing abroad, leaving only 40,000 in Nigeria, with about 70 percent practicing in urban areas, living rural dwellers vulnerable to health challenges.

The Dean revealed further that only doctors 1, 200 are presently practicing in Plateau State.

Vice Chancellor of the University of Jos, Prof. Sebastian Maimakoin, in his address at the occasion, also charged the newly-qualified doctors to serve their fatherland in their profession.

Prof. Maimako was represented at the ceremony by the Deputy Vice Chancellor Administration, Prof Tanko Ishaya.

He said the Federal Government desires that medical personnel who graduated from government-owned institutions should reciprocate by rendering services in the country as medical doctors.

Similarly, the Registrar, Medical and Dental Council of Nigeria (MDCN) Dr. Tajudeen Sanusi, who spoke through the Head of Training of the Council, Dr. Henry Okwuokenye, warned the fresh doctors not to embark on overseas journeys immediately in search for Jobs.

The MDCN Registrar charged the new inductees to observe and obey rules of the profession.

He reminded them that they were dealing with human lives and therefore, should be guided by the ethnics of the profession.

During the official oath taken, Dr. Sanusi threatened that any of them found wanting in the ethics of the profession would made to face disciplinary actions by a constituted tribunal of the profession.

On his part, Provost, College of Health Sciences, Prof. Simon Yiltok, told the MDCN and the public that the new inducted doctors were qualified to practice anywhere in the world following the intense training they had acquired during their studies.

“We can attest to the fact that they (Doctors) have had quality training and a summative assessment that has led to their success.”

Prof. Yiltok stressed further that “they have been taught by the best of lecturers/Doctors in the classroom, laboratories, clinics emergency rooms, theatres and other specialized units within and outside this hospital.

“Therefore, they can hold their head high anywhere.”

Out of the 60 newly-inducted medical doctors, only seven were females. It was learnt that one of the students died during the six years studies.