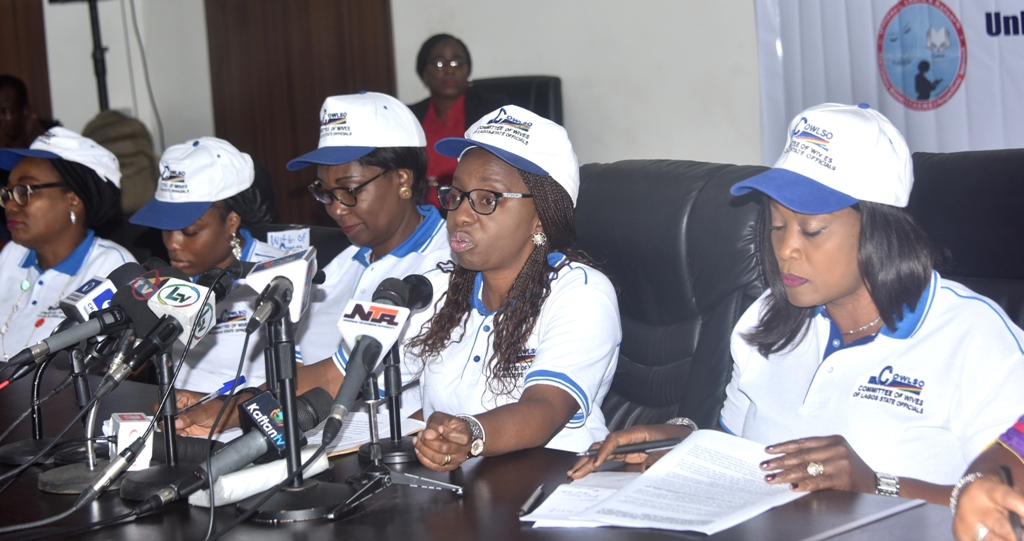 A total of 3,000 participants are expected to attend the 2019 National Women Conference (NWC) of the Committee of Wives of Lagos State Officials (COWLSO), Convener of the Committee and First Lady of the State, Dr. (Mrs.) Ibijoke Sanwo-Olu has said.

Addressing a press briefing at the Bagauda Kaltho Press Centre in Alausa, Ikeja on Friday, Dr. Sanwo-Olu said all was set for the 19th edition of the annual conference which would hold at the Convention Centre of Eko Hotels and Suites, Victoria Island from October 22 to 24, 2019.

She said the theme of this year’s conference: “Unlearn, Learn And Relearn: 21st Century Women’s T.H.E.M.E.S Perspectives/Approach,” was carefully selected after rigorous brainstorming sessions, saying that it was designed to empower women with skills to key into emerging opportunities being provided by the administration of Governor Babajide Sanwo-Olu in the State.

“As it is the tradition of the Conference to strategically empower women to contribute positively to the development of the State and Nigeria at large, this year’s theme was carefully selected in line with the vision and aspiration of the present administration in Lagos State to bring about greater Lagos of our dreams.

“We have lined up very eminent Nigerians and outstanding professionals to help our women come to terms with how best they can key into the emerging opportunities being provided by the government of the day in Lagos State,” she said.

Giving details of the dignitaries billed to attend the conference, Dr Sanwo-Olu said the First Lady of Nigeria, Hajiya Aisha Buhari would declare the Conference Open, alongside Governor AbdulRahman AbdulRazaq of Kwara State, while his counterpart from Nasarawa State, Governor Abdullahi Sule would serve as Special Guest of Honour at the closing ceremony.

She said aside the main theme, other sub-themes includes: “The 21st Century Woman – Build Not Born To Influence The Society; Entertainment And Tourism: Prism Of Possibilities – Tourism and Entertainment; The Total Woman; Entrepreneurship: Making Money And More Money – Agric Entrepreneurship, Financing and General Trading; Mould A Child And Build A Greater Generation; Healthy Woman – A Healthier Nation: Maternal & Child Mortality; Development And A Healthy City – Creating A Balance – Waste To Wealth, and Obey Traffic Laws,” among others.

She added that as part of efforts to give more women the opportunity to participate, the conference would be live-streamed on various media platforms, while participants can collect conference materials at Lagos House, Alausa, Ikeja from 17th to 19th October, 2019.

She said in furtherance of the need to create more awareness, an Awareness Walk would be held on October 12 from Ikeja Local Government back to Lagos House, Alausa from 7am, while as part of COWLSO’s Corporate Social Responsibility (CSR) initiatives, she would pay a courtesy visit to the Children and Post Natal Wards of the Lagos State University Teaching Hospital (LASUTH), Ikeja also on October 12, to identify with the babies on admission.

She added that there would be raffle draw at the gala night of the conference with opportunities for women to win mouth-watering prizes including a house, brand new cars, first class return ticket, deep freezers, among others, while buses would be available to convey particpants from the venue to Lekki-Ajah, Oshodi-Mile 2, Agege-Iyana Ipaja, Ojodu Berger, Yaba, and Ojota/Ketu.

Special awards, according to the First Lady, would also be presented to the Inspirational Woman Of the Year and as well Certificates Of Appreciation to individuals and Corporate Sponsors who have constituently supported COWLSO, adding that all necessary arrangements have been firmed up in terms of logistics, security, welfare, among others.

Besides, the First Lady seized the opportunity to celebrate the International Day of the Girl-Child which is marked across the globe on every October 11, assuring that the present administration in the State would spare no effort to frontally address all issues affecting the girl-child with the required vigor, zestfulness and determination.

On her plans for women in the State, the First Lady said concerted efforts would be geared towards medical assistance, financial assistance to students especially through the ‘Adopt A Student Project,’ creating more awareness to women, building more youth centres, and a lot of health interventions, among others.

At another environmental sanitation exercise embarked upon by COWLSO to clean-up some streets in Ikeja, the First Lady urged women to embrace the Blue Box programme of the State Government, and cultivate the habit of proper waste sorting.

Game over for randy lecturers