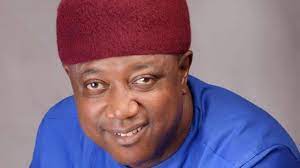 The senator representing Imo North Senatorial District in the Red Chamber of the National Assembly, Sir Senator Frank Ibezim, has enjoined presidential aspirants from the South-east geopolitical zone yet to buy the N100 million worth nomination forms of the ruling All Progressives Congress, APC, to drop their ambition and queue behind Minister of State for Education, Hon. Chukwuemeka Nwajiuba, The Daily Independent reports.

He said by being the first to pick the nomination forms, Nwajiuba has in a special way demonstrated his readiness and capacity to provide leadership to the country and importantly the zone, which for years has clamoured for the nation’s number one seat.

Ibezim added that Nwajiuba has the capacity, resourcefulness and closeness to the power levers to successfully represent the zone and the country at large.

He said: “The purchase of form and acceptance to contest the presidential ticket of APC by Honorable Chukwuemeka Nwajiuba ( HCN) the Minister of State Education is a thoroughly remarkable development.

“In this context being the first person to have secured this form to contest and also from the South-East shows seriousness, capability and commitment to lead the party to victory, he deserves the complete and total support of all progressive party men and women, especially South Easterners.

“For long, we have clamoured to be given the opportunity to provide leadership of this country at the highest level. The has come and Hon. Nwajiuba is that person who has the competence, youthfulness, likeability and closeness to the President and other key stakeholders of the party.

“Given these facts, I want to call on other South-East politicians nursing similar ambition and who have not purchased the form to put a halt.”

Emphasising the need for unity, Senator Ibezim said politicians from the South-east should not give room for those that mock the Igbo for lacking in unity.

“This is the time for unity; this is not a contest we want to go into scattered, bruised and fighting ourselves.

“Nwajiuba from every indication is the key to APC presidential ticket. Let us rally round him. Let us not give those, who mock the Igbo that they are never united the room to do so.

“With Nwajiuba already in the ring, let us rally round him. Let us not throw away this golden opportunity. This is the time to speak with one voice. I call on Igbo leaders, to rally together to enable us to get to this destination.”

The Minister of State for Education accepted the forms purchased for him by a group of patriotic Nigerians and indicated his interest to run.

A section of Nigerians has, however, criticised the former lawmaker’s decision, citing failure to address the protracted strike action by university lecturers as reason.

Others contend, however, that those criticising Nwajiuba do so out of ignorance or mischief, arguing that the university system is under the main  Minister of Education, and not the Minister of State.

They posited that the Minister of State oversees Basic Education and shows up on university matters when sent by the main minister.