... As Wosu, Stephen escalate the Amaechi Gospel round Europe 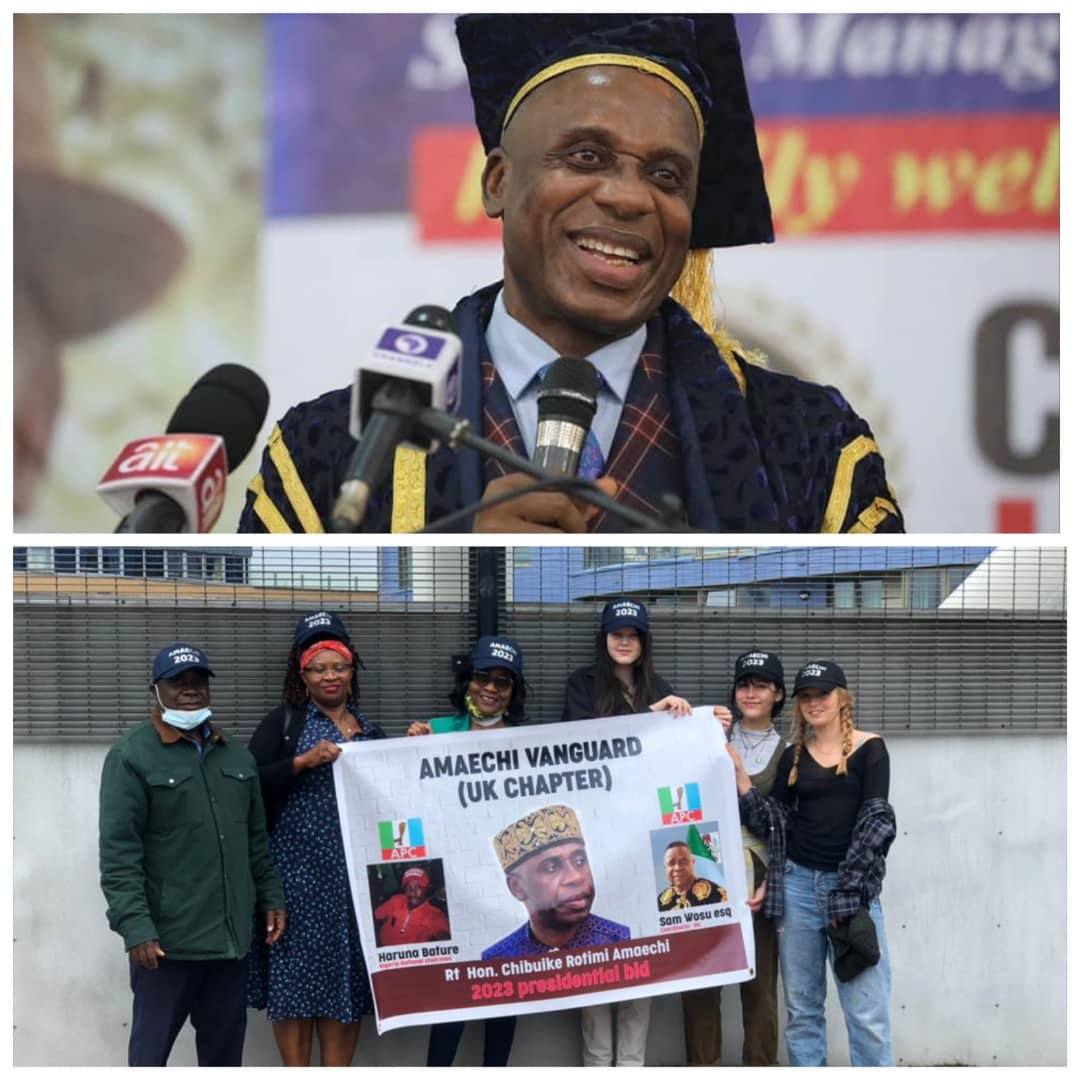 The berth of the Amaechi Vanguard a nongovernmental organisation, aimed at the promotion of good governance, unity, equity and progress of Nigeria in the United Kingdom at this critical period of the annals of our nation is described as a good omen which if well harnessed will assist to educate, propagate and promote the vision and mission of Rt. Hon. Chibuike Rotimi Amaechi towards egalitarian, one indissoluble and indivisible Nigeria.

Barr. Sam Wosu, a reputable and highly-acknowledged leader of Nigerians who have used his position to promote the wellbeing of most Nigerians residing in United Kingdom, is spearheading the formal take off the Amaechi Vanguard in the United Kingdom.

According to Barr. Wosu, “Though Rt. Hon. Chibuike Rotimi Amaechi erstwhile Governor of Rivers State and incumbent Minister of Transportation is yet to declare any interest to run for any office come 2023 but after careful monitoring of events and the happenings in Nigeria, we can no longer leave the issue of the future of Nigeria and who is to govern her come 2023 in the hands of few leaders”

“Seeing how this man could turn the moribund Railway system in Nigeria into the main achievement of the APC led Federal Government as a Minister just for six years we see in him as the leader that is capable of turning the sad and sorry state of our nation into the vision of the founding fathers of Nigeria, we Nigerians in United Kingdom resolve to market this man and in the process mobilise Nigerians both in Diaspora and in Nigeria to prevail and pressure him to indicate interest in the 2023 general elections so that collectively we can take our country to the next level.

“With the launch of the Amaechi Vanguard in UK at the Emirates stadium, North London and with Hon. Sam Wosu Esq. as the UK Coordinator, our mission is to take a tour of USA and other European Nations to ensure that collectively we will pressurise Amaechi to come out and bail out our nation at this trying period in our history come 2023.”

During the inauguration of the Movement, the Association was able to elect creditable leaders that will assist Barr. Wosu to run the association effectively of which Dr. Elizabeth Worgu was unanimously elected as Assistant Coordinator.

Considering his track record of achievements during his first and second tenure as Governor of Rivers State and currently as the minister of transportation, his developmental approaches is the tonic and tool that our nation need at this period to reposition her as a potential world power.

“We believe his turnaround in the transportation sector has earned him huge credibility which in turn has started to impact positively to Nigeria and Nigerians.”

He is the CEO and chairman of Nyege Mabel Wosu Foundation through which he touches the lives of most less privileged in our society.

He is a mental health practitioner with the child and adolescent psychiatry in the UK National health service and a part time caseworker with Mirach Solicitors in the UK.

In another development, Eze stated that Chief Ihuanne Nkem Stephen the President of Rivers State Indigenes in United Kingdom expressed that if Nigeria was to move forward positively, then all Nigerians both at home in Diaspora must unite in the mission of mobilising the entire world behind our collective aspiration of forcing Rt. Hon. Chibuike Rotimi Amaechi to throw in his hat for the 2023 general election. “Those of us from Niger Delta region are already mobilised and we hope to visit Nigeria by September to continue with our mobilisation of our people towards this noble goal” Chief Ihuanne said.

Chief Stephen who took time to commend and congratulate Chief Eze Chukwuemeka Eze for his untiring efforts in marketing Amaechi and most of his key Team members described Chief Eze as a great asset in this crusade of turning around the fortunes of Nigeria come 2023.

Chief Stephen postulated that as the President of Rivers State Indigenes Association and like minds of UK Rivers state Branch that we will like to pay you Chief Eze a thank you visit in consideration of your kind of support you render to Amaechi our brother and leader. ” I therefore plead with you, Chief Eze, to permit us to see you when we come to Nigeria for 2023 sensitization of our people come September, 2021 as you are the manna found in Jesus that made him Jesus Christ. May God continue to bless you and your family.”

Chief Stephen further highlighted that, “Chief Eze, I am yet to believe that people like you still exist in this world that could go this far in promoting Amaechi the way you are doing not minding that most of the people who through him got promoted in their political career have all deserted him with no sign of appreciation or gratitude but with little or nothing to you even against the risk of your life you have not relented in your support to our brother and Leader.

“God in Heaven is aware of my present state of mind and hereby appeal to God to bless you abundantly and keep us together till we meet with you one on one come September, 2021”.

Mal. Haruna Ibrahim, the National Coordinator of Amaechi Vanguard, who monitored this event through Zoom, commended Barr. Wosu and his team for creating history by spreading the vision of the Association to the European nations and assured them of his unflinching support whenever required.

Ekiti PDP alleges Gov. Fayemi has accord with bandits