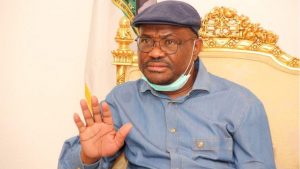 Three suspects arrested for detonating explosives at the Christian Universal Church in Port Harcourt, Rivers State, have reportedly said they carried out the act to get “juicy appointments” from the Indigenous People of Biafra (IPOB).

The church is said to belong to the father of Nyesom Wike, governor of Rivers.

Although IPOB has denied involvement in the attack, the suspects reportedly made the confession while being paraded by Joseph Mukan, commissioner of police, at the police headquarters in Port Harcourt.

The CP said investigations revealed that members of the proscribed group were deployed in Rivers to cause chaos in different parts of the state.

“We received a distress call that there was a blast at Christian Universal Church International, in Azikiwe, Mile 2. We mobilised our team of bomb experts to the scene,” Mukan said.

Nasarawa gov. thanks Buhari for extending tenure of IGP Adamu

“When we got there we found out that there was a blast. There was no life lost. Our security partners, the vigilante, had arrested these three suspects. We took them and they have made useful confessions.

“They are Progress Owudinjo, 37, from Etche, Rivers State. Apuro Victor, 25, came from Ebonyi State for this mission and John Okorie, 38 years old from Abia State. According to them, they are all over the state.

“They will soon be charged to court while we are trailing their sponsors. IPOB has assured them that if IPOB is achieved they will be policymakers in the government.”

Oduwinjo, one of the suspects who reportedly confirmed they are members of IPOB, said they were contracted to carry out the act.

“We were contracted to carry out the act. We got there in the night and we detonated the explosive,” he said.

I met my mother’s body on the floor, swollen – man tells judicial panel

Nasarawa gov. thanks Buhari for extending tenure of IGP Adamu

Biden pushes for legalisation of homosexual rights in Nigeria, others